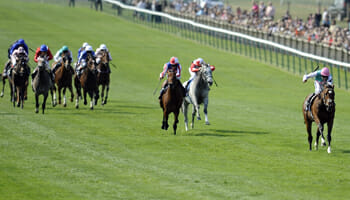 The sport of kings has thrown up any number of memorable events, but we’ve picked out our top 10 great horse racing moments from the past 50 years.

Magical thoroughbreds, legendary trainers and iconic jockeys feature in the list of races which had both punters and purists purring with delight.

Top-weight Crisp led his rivals a merry dance throughout the Aintree spectacular, majestically powering 30 lengths clear, and was still 15 lengths ahead at the final fence. But Red Rum, in receipt of 23lb, came out of the chasing pack and produced a flying finish to reel in the long-time leader and claim the first of three National triumphs in one of the greatest horse races of all-time.

Bet on the Grand National

After being held together for smooth successes in the Kentucky Derby and the Preakness Stakes, Secretariat was given his head and allowed to unleash his full power at Belmont, demolishing his rivals to romp home by an incredible 31 lengths and complete the first Triple Crown for 23 years. CBS sportscaster Chic Anderson famously remarked: “He is moving like a tremendous machine!”

English and Irish Derby winner Grundy got the better of Bustino in a battle dubbed Britain’s race of the century. After the latter’s two pacemakers had set a relentless gallop, the market leaders waged war in a nip-and-tuck tussle down Ascot’s final furlong to create one of the most epic moments in horse racing history.

After chasing home Affirmed in the first two legs of America’s Triple Crown, Alydar was backed to gain revenge over an extra two furlongs and looked set to do just that when edging ahead up the home stretch. However, Steve Cauthen conjured up one last rally from Affirmed, who was a nose in front at the wire.

After cruising to the front around Tattenham Corner, Shergar moved sweetly clear before galloping further and further away from his flagging opponents. “There’s only one horse in it, you need a telescope to see the rest,” cried Peter Bromley for BBC Radio as the white face of Shergar blazed to a 10-length victory. That iconic image is one of our great horse racing moments.

Bet on The Derby

Arguably the most spectacular performance in Breeders’ Cup history, as French raider Arazi came from at least a dozen lengths back in the rear to rout a talented line-up. Pat Venezuela weaved through the field and quickly settled the issue at the top of the stretch, with NBC Sports racecaller Tom Durkin shouting: “Arazi runs right by them…here indeed is a superstar!”

Makybe Diva swooped up the Flemington straight to storm three lengths clear and then comfortably held off the late movers to complete a historic treble in the race that stops a nation. “A champion becomes a legend,” roared the commentator, as the British-bred and Australian-trained mare produced one last magical moment before being retired after the race.

After hitting the front with a circuit to go, Denman jumped for fun and ran defending champion Kauto Star ragged in their first Cheltenham Festival meeting. Richard Hoiles described that display as: “Relentless, remorseless.” However, 12 months later, Kauto Star was back on top when becoming the first horse to regain steeplechasing’s blue riband, with Denman 13 lengths back in second.

Bet on the Cheltenham Gold Cup

Even seasoned professionals were left stunned and could only watch on in awe as the mighty Frankel took up the running early on at Newmarket and galloped into a sizeable lead. Questions were asked over whether Tom Queally had struck too soon, but Henry Cecil’s wonder-horse didn’t stop. “A horse who is pure class, Frankel has destroyed them from halfway – an amazing performance,” went the commentary on one of the greatest racehorses of all time.

American Pharoah was pushed hard in the Kentucky Derby and had to overcome sloppy conditions in the Preakness Stakes, so the Belmont was expected to be a tough test of his resolve. However, Bob Baffert’s superstar made all the running and eased clear late on under a brilliant ride from Victor Espinoza to finally end the Triple Crown drought. “The 37-year wait is over, American Pharoah is finally the one,” roared racecaller Larry Colmus.