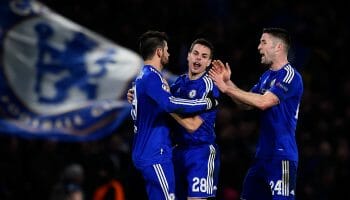 The 2017/18 Premier League fixtures give fans a fleeting glimpse of the season ahead, but many underestimate the importance of the list.

While every team has to play everyone else at some point, timing can be everything. A tough start can easily undermine a positive pre-season, while a gentle run of opening fixtures can provide the momentum necessary for a successful campaign.

The graphic below breaks down each club’s first 10 Premier League fixtures of the 2017/18 season based on which of their opponents are among the six favourites for the title and the six favourites for relegation, according to bwin’s latest odds. The resulting patterns highlight tough and easy runs of games during the first three months of the season.

We would not suggest putting any Everton players in your fantasy football teams until the back end of September at the earliest, and even then they may be a little shell-shocked. The Toffees have been handed the toughest start to the season by far, with the likeliest occupants of the final top four all facing them in the first five weeks.

It is also a second consecutive tricky start for Leicester, who had to face five of the six toughest teams in their opening 10 games last season and have to deal with four of the same six in their opening six matches this time around. Craig Shakespeare’s men at least have two games against the relegation favourites to break things up a bit.

Out of the teams expected to challenge for a Champions League place, Arsenal could start the slowest as they do not have an easy-looking game until late September and have to deal with both Chelsea and Liverpool early on.

If Claude Puel can cling on at Southampton over the summer, the fixture computer has provided him with the perfect opportunity to win back the faith of the Saints’ fans and board. Whoever is in charge need only face one of the six title favourites in their first 10 Premier League fixtures, compared with five of those deemed most likely to be relegated.

West Ham have been handed a similarly gentle start to 2017/18, also facing five of the six weakest-looking teams in the division and just two of the toughest in their opening 10 matches. This should allow Slaven Bilic – another manager who is under pressure after a disappointing campaign last time around – a chance to build some momentum.

Towards the top of the table, Tottenham have now participated in two successive title races without ever sitting in first place but have a chance to do so early on in the 2017/18 season. Four of their first seven Premier League fixtures are against teams expected to struggle and they only have one tricky match – at home to Chelsea – in that sequence.

We could also see Manchester United start well as they do not have to face another expected title challenger until the beginning of October, although they only meet one of the division’s least-fancied teams during this spell.

With Chelsea hosting Burnley – hardly renowned for their away performances – at the start of their campaign, the Blues could extend their impressive opening-day unbeaten run. The last time they tasted defeat in their first match was way back in 1998, having won 15 and drawn three of their last 18 opening-day Premier League fixtures.

Another strong sequence of opening-day performances could be extended by Manchester City, who have triumphed in seven of their last eight openers and travel to new boys Brighton this time around. Watford’s impressive 10-match unbeaten run on the opening day could come to an end, though, as they face Liverpool in their first game of the season.

We have seen how Everton are unlikely to prosper early on this season, but an opening home fixture against Stoke could see them improve a dire record of just one win out of their last nine attempts on the first day of the Premier League season. The Potters themselves are without a win in seven opening-day matches, so will be similarly motivated to start this campaign well.