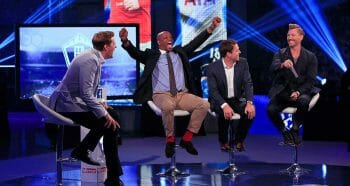 Universally disagreed with by their armchair equivalents, the observations, analysis and comments made by professional pundits quite often receive as much attention as the action they’re paid to talk about.

It’s for this reason that news.bwin have been monitoring the leading experts employed by the biggest broadcasters of the beautiful game’s mentions on Twitter over the last month.

The purpose of the study was to discover who the masses like the most and results suggest it’s the BBC producers who have assembled the smartest team.

Over the past month, Ian Wright has attracted the most positive attention on Twitter, with 58% of the posts referring to the former Arsenal and England ace in support of what he had to say.

Roving between Match of the Day and BT Sport, the top emotion involved in Wright’s mentions was excitement.

This certainly wasn’t the case when people tweeted about monotone Geordie Alan Shearer, but punters still appreciated what the Newcastle United legend/MotD staple had to say, with exactly half of his mentions noted as positive.

Sky Sports’ Jamie Carragher was the most appreciated pundit on the nation’s leading screener of Premier League soccer, receiving a 47% positivity rating. 8% of these tweets discussed the user’s admiration for the man with more Liverpool appearances than anyone bar Ian Callaghan.

The most mentioned of the subjects in the study was MoTD anchor Gary Lineker, despite being more of a presenter than a pundit. Still, the crisp-peddling Leicester City fan was the subject matter in over 40,000 tweets over the last month.

With 31,500, Carragher was the second-most discussed, edging his fellow Monday Night Football know-it-all Gary Neville out to third.

The former Valencia manager was at the heart of 29,927 tweets, though only 29% of these were deemed positive. The keyword that appeared in most G-Nev-centric tweets was ‘muppet’, while the top emotion that revolved around such posts was profanity.

After drawing 1-1 at home to Stoke City, Neville’s former club Manchester United are now 14/1 to win the Premier League title.