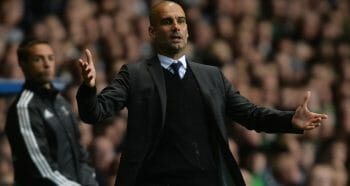 At first glance, the damage to Man City following their first defeat under Pep Guardiola away to Tottenham doesn’t seem too severe: with top spot in the Premier League maintained and likewise their status as 91/100 title favourites.

However, the problem with being perfect, as the Citizens were for their opening ten games under the Catalan coach in all competitions, is that it is really difficult to adjust when the feeling of infallibility dissipates.

Indeed, it is no coincidence that the Spurs setback came days after their maiden point spill under their three-time La Liga and Bundesliga-winning boss away to Celtic in the Champions League shone a light on a previously concealed crack or two.

Similar patterns were perceptible in Guardiola’s starts at Barcelona and Bayern Munich. His Bayern reign began even more terrifyingly than his spell at the Etihad Stadium, with the German giants winning 25 and drawing three of his initial 28 Bundesliga contests in 2013/14.

Yet when loss number one arrived away to Augsburg on April 5, it wasn’t an isolated failure. Instead, it was followed a week later by a 3-0 home defeat to Borussia Dortmund, who should have been demoralised having been beaten 3-0 in the reverse fixture and been unable to catch the champions.

The same thing happened when the former midfielder started his top-flight coaching career at Barcelona in 2008, only the first flop occurred earlier than not just his Bayern stint, but his Man City tenure too.

That’s right, the Blaugrana were conquered 1-0 in their opening La Liga encounter by promoted – and later relegated – Numancia five days on from a Champions League qualifying second-leg loss by the same scoreline to Wisla Krakow, who they had thrashed 4-0 at Camp Nou.

Still, hosting Racing Santander presented the ideal opportunity to bounce back, right? No, instead they were held 1-1. It is 33/20 that Man City suffer the same double dip when they welcome former bogey club Everton after the international break by dropping one or three points in that clash.

Of course, there is no need to be too negative though as both of those sides won titles in those seasons despite such difficulties, explaining why the EFL Cup holders remain odds-on to finish first.