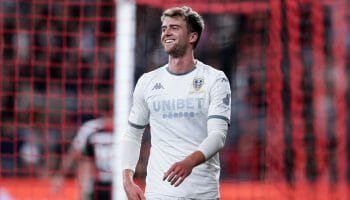 Saturday lunchtime’s Yorkshire derby at Hillsborough has more at stake than just bragging rights with both teams firmly in the mix to finally return to the Premier League.

Just one point separates the two teams after Sheffield Wednesday gained ground in midweek with a home win against Stoke while Leeds were held to a 1-1 draw at Preston.

This looks to be Wednesday’s toughest test so far and although they have enjoyed a recent improvement, we fancy an away win at 11/10 as our opening Sheff Wed vs Leeds prediction.

Wednesday have suffered only one defeat since Garry Monk took over and the Owls have certainly become harder to beat, conceding just four goals in seven games under the former Leeds boss.

Another clean sheet on Tuesday night meant Massimo Luongo’s goal late in the first half was enough to secure a second successive 1-0 win at Hillsborough.

That result lifted Wednesday up to third after Tuesday’s games but Monk said: “The table means nothing to me and the boys that are here.

“It’s great to be in a healthy position. It shows that you’re doing something right and you’re moving in the right direction, but the league table means nothing. The key is to focus with these players on their effort and commitment.”

It must be noted that Wednesday have enjoyed a favourable run of fixtures and have only faced three teams in the top half, picking up just one point from those three games.

Only one of their six home games have produced three goals or more and there have only been four first-half goals in six matches at this venue so we’ll add a goalless first half to our Sheff Wed vs Leeds betting tips at 7/4.

Leeds began the season with four straight away wins and scored 10 goals in the process.

They have been less convincing on their travels since then, managing just one point and two goals from their last three road trips.

An early red card was a mitigating factor for the 2-1 defeat at Millwall, though, and the midweek 1-1 draw at Preston was a creditable result given North End’s home form this season.

Leeds had several chances to take the lead but were made to pay for their profligacy in front of goal when Preston’s Sean Maguire raced free down the right and crossed for an unmarked Tom Barkhuizen to tap home.

But Arsenal loanee Eddie Nketiah rescued a point for the Whites after looping a header over Declan Rudd with just three minutes left.

There is a sense that there is more to come from Leeds in terms of goals but they still look arguably the best team in the Championship.

Three of their victories this season have been 1-0 and that was the score when Leeds beat Wednesday in April so we’re backing the same outcome again at Sheff Wed vs Leeds odds.