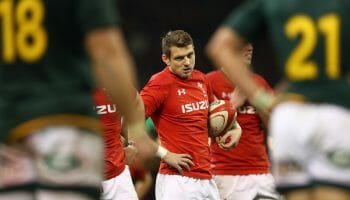 Wales made hard work of reaching the last four but are now just one win away from their first Rugby World Cup final.

The Six Nations champions were in danger of elimination last weekend but came from behind to claim a 20-19 victory against France and set up a showdown with South Africa.

The Springboks are firm favourites but we think the value is with a Wales win at 5/2 as our opening Wales vs South Africa prediction.

A Look At Wales’s Betting Odds

Wales were not at their best against France but still found a way to get through in a gripping quarter-final in Oita.

A Wales win looked unlikely for long periods as an often flamboyant and brilliant French team dominated, but the game changed course after Les Bleus lock Sebastien Vahaamahina was sent off in the 48th minute for elbowing Wales flanker Aaron Wainwright in the face.

Wales trailed by nine points at the time but they dug deep and clinched their place in the last four thanks to Ross Moriarty’s 74th-minute try that Dan Biggar converted.

Wales have won five of their last six Tests against South Africa – four in Cardiff and one in Washington DC. Although it is questionable how much bearing those games will have on this weekend’s match, Wales will certainly not be in awe of their opponents.

Coach Warren Gatland said: “We are fairly familiar with South Africa and have had a fair bit of success against them. We’ve had some close encounters in recent years and had some good success.

“They pose different threats to some other teams. There was a period a few years ago where they were trying to emulate the All Blacks or Australia; trying to be a bit too expansive in the way they played.

“They’ve gone back to their strengths, and their strengths are definitely that physicality up front with driving line-outs and a strong scrum and ball-carrying.”

The teams look well matched and with a close game expected, we’ll add Wales to win with 7.5 points on the handicap to our Wales vs South Africa betting tips at 91/100.

South Africa ruined the party in Tokyo last weekend with a 26-3 win against hosts Japan.

Makazole Mapimpi crossed for two tries and Faf De Klerk also raced in, with Handre Pollard posting 11 points off the tee as South Africa squeezed the life out of the Brave Blossoms.

They will be given a much more physical test in the second semi-final, though, as they bid to reach their first final since 2017 and stay on track for a third world title.

Wales have won 20 of their last 23 matches against all opponents and South Africa assistant coach Matt Proudfoot said: “They are a formidable side, an unbelievable rugby side.

“They have great confidence in the way that they play. Wales play to their plan. The way they played against Australia was incredible.

“France had to risk it against them, and they did, but Wales still won. They are a very well-coached side.”

South Africa’s hopes suffered a setback when Cheslin Kolbe was ruled out due to an ankle injury.

The Springboks’ star wing suffered the injury against Pool B opponents Canada and then aggravated it during the quarter-final victory over Japan.

He has been replaced by Sbu Nkosi as a solitary change to the starting line-up that accounted for Japan but it is a major blow for South Africa, given Kolbe’s renowned game-breaking and try-scoring ability.

We had pencilled in Kolbe for the first try but in his absence, we like Wales vs South Africa odds for Wales star Josh Adams to cross first and add to the five tries he has already scored in this tournament.