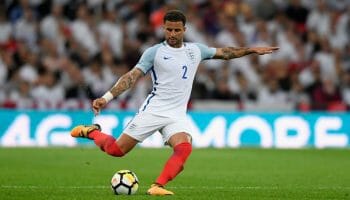 Gareth Southgate’s England squad line up against two of world football’s superpowers this week – Germany and Brazil – and a cursory glance at the relative cost of the three squads had us wondering whether the price of English players in the transfer market is inflated.

While a mid-table Premier League team could probably be assembled for the fee that PSG paid for Neymar alone, both of England’s opponents feature plenty of bargain signings and we decided to dig into the transfer data to see whether English players represent good value for money.

The cost of English players is rising fast

The average Englishman signed this season cost over two and a half times as much as three years ago; a whopping £14.9m compared with £16.3m for an overseas player.

To compare the cost of England’s internationals with their German and Brazilian counterparts using their current squads is probably unfair given that all three nations are likely to experiment and a spate of withdrawals from the England camp has muddied the waters further. Therefore we have worked out which 11 players each nation relied on most heavily during their World Cup qualifying campaigns.

The most-used England XI weighs in at a combined £218m in fees, compared to just £171m for the Germans and, if the mammoth fee paid for Neymar is excluded, £163m for the other 10 Brazilians. Even if the fees were equal, the relative accomplishments of the three nations in recent tournaments would raise questions around value for money.

For the top clubs, English players are an expensive option

We were also interested in what was driving the high cost of English players, and found that the fees paid by top clubs are driving this inflation. The Premier League’s ‘big six’ have paid an average of over 20% more for English players than non-English ones since the start of last season, while the rest of the division pay roughly the same proportion less for domestic talent.

Looking at the players joining the ‘big six’ clubs over the last decade, we can see that it is players at their peak who are the most heavily inflated. Over half of English signings aged between 25 and 27 were one of the season’s 10 most expensive transfers, compared to around a third of foreign arrivals.

What’s the priciest starting XI you can build?

To end with a bit of fun, we returned to our team selections and expanded them to include every eligible English, German and Brazilian player to build the most expensive starting line-ups possible.

Yet again, ignoring the Neymar factor, the England side comes out as the most expensive, with a combined cost of £353m to assemble. Germany’s team weigh in at £286m while the rest of Brazil’s line-up rises to £348m.