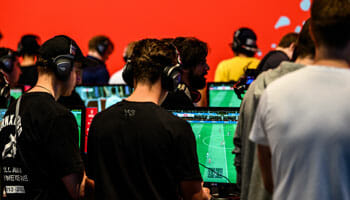 In the absence of live sport, many people are turning to the electronic variety for both entertainment and betting purposes.

The popularity of football translated well to the digital world even before the coronavirus pandemic, with plenty of prestigious tournaments held in public arenas and with substantial prize money on offer.

The lockdown has seen that interest has spiked further, with plenty of attention now being paid to the various online eSoccer tournaments which take place on a daily basis.

We have produced an eSoccer virtual football guide to help people understand and follow, profiling the top competitions and the leading players who dominate them.

Which eSoccer tournaments are the most prestigious?

Since football video games first started appearing in the late 1970s, many developers have tried their hand at creating one but two modern titles have emerged as the clear favourites: EA Sports’ officially licenced FIFA series and Konami’s Pro Evolution Soccer (PES).

There was a time when FIFA and PES were close rivals but respective followings on streaming site Twitch show the EA title has left Konami’s trailing in its wake, with more than 3.3 million followers of FIFA compared to PES’s paltry 124,000.

We will, therefore, focus on FIFA and their flagship Global Series events in our eSoccer virtual football guide.

In theory, anybody over the age of 16 can qualify for a tournament by winning 27 of their 30 matches in the game’s Weekend League mode.

From there they can earn ranking points in a range of events, with the 16 top-ranked players on each of the two main games consoles at the end of June qualifying for the eWorld Cup – the winner of which takes home $250,000.

There are other major tournaments in the calendar, including an electronic version of the Champions League – but the winner of the eChampions League takes home less than half as much as the eWorld Cup champion ($100,000).

The FUT Champions Cup is the most regularly contested tournament, with five iterations en route to the eWorld Cup.

These tournaments, in addition to the eChampions League, the ‘Majors’ (the eClub World Cup and eNations Cup) and an end-of-season play-off tournament, are all chances for players to earn ranking points.

As a result, the top players compete in almost every tournament but the eWorld Cup is the prize they are all chasing.

What distinguishes the best eSoccer players?

We have analysed the squads used by the eight semi-finalists at the most recent FUT Champions Cup – the last major FIFA tournament to be completed before the lockdown – to see what they have in common.

The first thing to notice is how expensive their squads are to assemble: if you loaded up the game today and tried to buy a similar starting XI it would set you back the real world equivalent of roughly £10,000.

All eight semi-finalists had the top-rated versions of Virgil van Dijk in their defence, Ruud Gullit in their midfield and (the Brazilian) Ronaldo up front. The other Ronaldo – Cristiano – was also deployed in seven teams, but nobody was using his rival Lionel Messi.

In addition to prize money and endorsements, top FIFA players can also attract a sizeable following on social media.

Donovan “Tekkz” Hunt – one of the world’s best players – has almost one million followers across Twitch, Twitter and YouTube and is a household name among eSoccer fans despite still being 17 years old.

How is eSoccer different?

Betting on eSoccer is remarkably similar to the real thing, with many of the same markets available.

However, with FIFA there are important differences: not only between it and physical football, but also between different versions of the game.

The average number of goals scored is perhaps the most crucial distinction to be aware of.

Matches between the top FIFA 20 players have tended to see fewer goals than top-level football and these dry up the deeper you go in a competition.

For example, the last 10 UEFA Champions League finals have seen an average of three goals scored, but this season’s finals and grand finals in the FUT Champions Cup have seen fewer than two.

This marks a huge shift from FIFA 19, when goals were nearly twice as common as in this year’s game and matches were higher-scoring than those in the physical sport.

Unlike other eSports where the game mechanics are relatively consistent, the FIFA series sees gameplay changes from year to year and therefore patterns from previous versions may not hold when a new game is released.