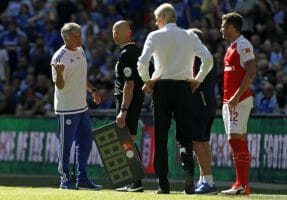 Arsene Wenger has less unfinished business than most as he moves towards the end of his lengthy and largely successful time as Arsenal manager.

There remain boxes still unticked though and along with his failure to secure an elusive Champions League title, his inability to defeat bitter rival Jose Mourinho in a competitive fixture will surely rankle.

This Saturday’s trip to Old Trafford – his 27th visit – presents him with a tantalising opportunity to make his 12th competitive meeting with his Portuguese nemesis a successful one. The following graphic outlines 12 reasons why the stats are pointing to an Arsenal victory against Manchester United this weekend:

Firstly, Wenger’s charges are in a rich vein of goalscoring form that United can only envy. No Premier League club has converted chances as readily as the Gunners this season, with fewer than seven shots taken for each goal scored, while United have been among the division’s most wasteful finishers.

The ease with which Arsenal are finding the net has seen them sitting in a losing position for just 58 league minutes this season – the least of any top-flight side and almost four times less than the 225 minutes in which United have trailed. The Gunners are now unbeaten in 10 Premier League matches, which is the third time they have racked up a run of this length since the Red Devils last managed it on New Year’s Day 2015.

Arsenal’s midas touch in front of goal has seen Wenger’s side net three or more times in over half of their Premier League fixtures so far: six out of their 11 outings. Coincidentally this is the same number of league matches in which a Jose Mourinho defence has shipped three or more goals since the start of last season: a 27-game stretch that has seen just eight clean sheets recorded. The man who perfected the art of ‘parking the bus’ in front of goal appears to have lost the keys to his.

A useful barometer for the two managers’ contrasting fortunes so far is how they have each coped against Mourinho’s former employers Chelsea. Wenger’s Arsenal ended a 10-match winless streak against the Blues with a cathartic 3-0 win at the Emirates back in September, while the man who won multiple titles at Stamford Bridge saw his new charges collapse to a 4-0 defeat there last month.

While home advantage may have been a factor in their respective encounters with Chelsea, there is no guarantee that it will work to Mourinho’s advantage this weekend. Arsenal’s defence has looked stubborn on the road, with only three teams soaking up more shots for each goal conceded than their average of 13.7.

The final word comes from the bookmakers at bwin, who have never priced Arsenal as short as the current 17/10 to register a win at Old Trafford in the history of the Premier League. It follows that United themselves have never been less favoured to send the Gunners home empty-handed: they are 8/5 to do so.

With the Gunners firing on all cylinders while Mourinho’s United continue to stutter, Wenger surely will not get a better opportunity than this to make one of the Premier League’s most compelling managerial rivalries a little less one-sided.