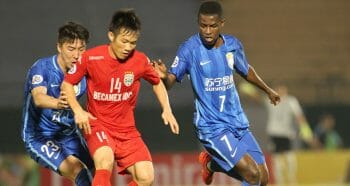 The extravagant spending antics in the Chinese Super League have overshadowed the winter transfer windows of all the major European leagues this season.

A division compiled of universally-unrecognised outfits announced its intention to rival the more reputable championships on the planet with a string of high-profile acquisitions that saw exorbitant sums change hands.

Super League sides forked out just shy of £243m this winter, roughly £53m more than their counterparts in the Premier League spent.

What was especially intriguing was the calibre of player China’s millions proved capable of attracting.

Unlike other exotic league locations outside of Europe – namely the USA and Qatar – those who flocked to the Super League were athletes in their prime, with Alex Teixeira, Jackson Martinez and former Chelsea midfielder Ramires among the many blockbuster buys.

As specified, Chinese Super League sides outspent every rival division in the world this winter, but what wasn’t outlined was the quality of player they bought.

Compare this to the Premier League’s ten priciest purchases this winter, where their average age was 25, cap count was 13 and their trophy cabinets had just one pot in. This inferior quality was reflected in the price, with the mean fee per signing at a significantly lower £11m.

In fact, no league in England, France, Germany, Spain, Italy and Belgium can claim to have recruited similar quality players. Those heading to the Chinese Super League have won more, represented their country more and have more experience to call upon.

While the spending in China obviously caught the eye this winter, it wasn’t the first window in which they’ve invested big.

Clearly, a sustained effort is being made to raise the standard in the Super League and, as the evolution continues, expect more big names to move to China.

However, while the land boasting the Great Wall may one day be considered the strongest footballing nation on the planet, they’re some way behind the most powerful soccer state on Earth.

According to bwin, that honour lies with Spain, who are priced at 67/100 to be the destination of the 2015/16 Champions League.