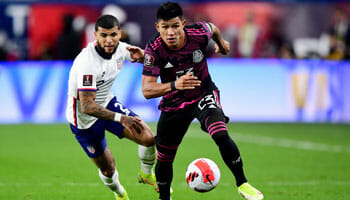 The United States have never won in Mexico in World Cup qualifying but will be on the verge of qualification for Qatar 2022 if they can buck that trend.

Both teams are level on 21 points and are four points clear of fourth-placed Panama with three games to go, so the winners will be in pole position to secure the runners-up spot behind Canada.

The Americans have won the last three meetings but those were all on home soil and they may be happy with a point here so a draw at 3.10 is our first Mexico vs USA prediction.

Mexico are looking for revenge this week after a 2-0 defeat in the reverse fixture in November.

The two teams looked well matched for long periods in Cincinnati but the USA made the breakthrough in the 74th minute through Chelsea’s Christian Pulisic before Weston McKennie sealed the win 11 minutes later.

That result was followed four days later by a 2-1 defeat in Canada but Mexico have got their qualification hopes back on track since then, winning 2-1 in Jamaica before back-to-back clean sheets at home saw El Tri draw 0-0 with Costa Rica and win 1-0 against Panama.

Mexico have looked stronger at the back during this campaign than they have in attack and they have only conceded two goals in five home qualifiers.

We’re expecting another cagey contest here and a goalless first half appeals at Mexico vs USA odds.

The USMNT go into their final three games in high spirits after a 3-0 win at home to Honduras last time out.

McKennie and Pulisic were again on target, either side of a Walker Zimmerman goal, and it was a solid defensive effort too with Honduras failing to manage a shot on target.

Playing in front of a big crowd at the Azteca Stadium will be a very different proposition though and the USA’s failure to win on Mexican soil is a worry.

Their away form during this campaign has not been overly impressive either, having been held to draws at El Salvador and Jamaica as well as losing 1-0 at Panama.

Only five goals have been conceded in five away matches though so the USA are unlikely to be blown away and their recent performances against Mexico suggest they can match their hosts.