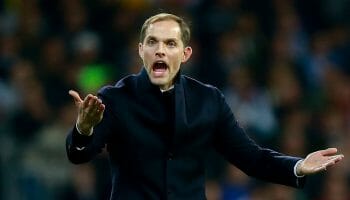 Robert Pires may be best known in England for his time at Arsenal but he also keeps a close eye on French football.

In the third part of his exclusive interview with bwin, Pires gives us his thoughts on events at Paris Saint-Germain, Marseille and Lyon.

Thomas Tuchel looks like he will be the next Paris Saint-Germain manager. Do you think he would be a good appointment?

The objective for Paris Saint-Germain has been to win the Champions League and so it is crucial that they appoint an excellent manager. Thomas Tuchel is a very good manager who has a fantastic profile. I think he would be successful at Paris Saint-Germain.

Do you think that Paris Saint-Germain will be forced to sell Kylian Mbappe or Neymar to meet Financial Fair Play rules?

I don’t think Paris Saint-Germain will sell Neymar or Mbappe this summer. The club is under a lot of pressure from Financial Fair Play, but Neymar and Mbappe are the two players that they absolutely need to win the Champions League.

Do you think Neymar will join Real Madrid in the future?

I think Neymar will sign for Real Madrid in the future. Neymar loved La Liga and he enjoyed his time at Barcelona. The type of player that he is and his profile is perfect for Spain and La Liga. Paris Saint-Germain spent a lot of money on Neymar and the project is all about winning the Champions League so there’s no chance that he will leave this year, but I think he could join Real Madrid next year.

Do you think Neymar could win the Ballon d’Or at PSG?

Have you been impressed with Mbappe’s first season at Paris Saint-Germain?

Mbappe was under a lot of pressure at Paris Saint-Germain because the club agreed to spend so much money on him, but he has played very well this year. Mbappe is very young, he has a lot of quality and he has a lot of potential to get even better. He has scored a lot of goals this season and I expect him to score even more next year. He is already one of the best French players and one of the best players in Ligue 1. I’m very confident he has a huge future.

Is there any chance that Marco Verratti will leave Paris Saint-Germain?

Paris Saint-Germain are being linked with Jan Oblak for a world-record fee. Would this be a good signing?

Paris Saint-Germain are very interested in signing Jan Oblak from Atletico Madrid. It would be very expensive but he’s one of the best goalkeepers in Europe. The club would need to sell two or three players to be able to afford him, but I think it would be worth it. I think PSG could win the Champions League if they were to sign Jan Oblak because we have seen he makes big saves in knockout competitions like the Europa League against Arsenal.

Have you been impressed with Marseille this season?

Marseille have had a fantastic season in Ligue 1 and in the Europa League. It could become even better if the club were to finish second in the league and win the Europa League! The club have performed very well since January and Rudi Garcia has found great stability in the team. The manager has a lot of experience and the team has been very impressive.

Have you been impressed with Florian Thauvin since he signed for Marseille?

I think Thauvin has been a fantastic signing for Marseille and he is my favourite player at the club. He has scored a lot of goals and he is filled with confidence. He found it very tough in the Premier League when he was at Newcastle United, but he is now performing very well for Marseille. He struggled to adapt to England but France is his home.

Who do you think should win Ligue 1 player of the year?

I think Thauvin has been the best player in Ligue 1 this season. He has scored a lot of goals and he has made the difference in a lot of big games for Marseille. I think PSG could look at signing him this summer, depending on what they do with Di Maria.

Memphis Depay has been on fire for Lyon this season. Do you think Manchester United will regret selling him?

Memphis Depay is an outstanding player. He struggled at Manchester United because it is difficult to change country and enter a new club, a new language and a new environment at such a young age. He is now a very important player for Lyon and he is making a big difference in the crucial games. I think Manchester United made a mistake when they sold him and they could regret it.

Do you think Lyon will be able to keep Nabil Fekir?

I think Lyon will receive offers from clubs across Europe for Nabil Fekir this summer. He has a lot of quality. He’s fast, he’s strong and he has a lot of quality. He has a profile that would fit the Premier League very well and I would be surprised if there weren’t attempts to sign him this year. Lyon have a fantastic academy and they are the best club for young players.

Do you think Dimitri Payet has played well enough to break back into the France team?

Dimitri Payet has played very well since January and I hope he has done enough to play for France at the World Cup. He has scored some fantastic goals and he takes very good free-kicks and corners which could be very important in the tournament. If he is in the squad, I think Deschamps will find a good solution for Payet and for the team.

Do you think Thomas Lemar will leave Monaco this summer?

Thomas Lemar will leave Monaco after the World Cup this summer. I think he needs a new challenge and would love to experience a new country. Arsenal were of course interested last year but I don’t know if that’s still the case now that Arsene Wenger will no longer be manager. He would be suited to the Premier League.