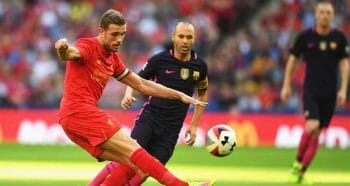 Emre Can has started both of Liverpool’s Premier League matches this season on the subs’ bench, with skipper Jordan Henderson selected as the anchor of the Reds’ midfield trio.

The Germany international’s involvement at Euro 2016 meant he returned to pre-season training later than the bulk of his colleagues and has since being playing catch up.

As Can nears optimum fitness, he’ll be expected to provide competition to his English counterpart at the base of Liverpool’s middle band.

But, statistically speaking, is this a tussle he’s capable of winning?

No player in the fledgling stages of this season has made more successful passes than Henderson, who has located teammates no fewer than 184 times in just two appearances.

While Henderson’s pass completion rate stands at a touch north of 90% after two matches of 2016/17, Can’s increased accuracy over the course of the previous campaign suggests he might be better suited to fulfilling such a duty. In total, 81.3% of his passes found their mark last season, shading the 79.1% his club captain mustered.

Defensively, the all-action German was by far the stronger last time around.

Although the average goals Liverpool shipped with Henderson on the field was better than that when Can was in action (1.06 to 1.26), the latter recorded better numbers in several key, attack-quashing areas.

Based on these figures, it’s clear who Liverpool should be starting as their holding-midfielder, though Henderson’s success in other areas suggest he could be of use higher up the field.

The Englishman created chances at a rate of one every 75.2 minutes last term, while Can carved a single opportunity every 84.7 minutes and failed to make one assist compared to his captain’s three.

An anchorman berth is better suited to the Bayern Munich academy graduate, whereas Henderson’s talents would be best utilised in a more liberated role. Recalibrating the midfield accordingly might help protect a defence that has shipped five Premier League goals in two games so far.

Even-money says Liverpool finish in the top four this season.