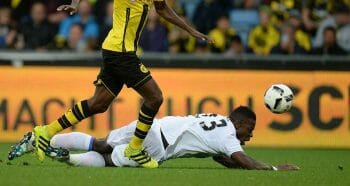 With the prospect of losing star defender Lamine Kone intensifying by the day, Sunderland have reportedly scribbled Alfie Mawson’s name at the top of their shortlist of potential replacements.

The Barnsley youngster has started each of the Tykes’ five games this term and is said to be subject of a £3m bid from the Wearsiders.

Mawson proved a pivotal figure in the south Yorkshiremen’s League One play-off win last term, but for a team who have such a dreadful record when shopping in the second-tier, completing this mooted transfer is laden with risks.

The Black Cats face losing their strongest centre-back before the summer transfer window closes and string of Championship buys that haven’t worked so well suggests replacing him with a second-tier superstar won’t be a smart move.

The most recent examples are Will Buckley and Liam Bridcutt, who Gus Poyet purchased from his former club Brighton during his short stint at the Stadium of Light.

Buckley featured 24 times and failed to score. He is now embroiled in a Championship loan odyssey that has taken him to Leeds United, Birmingham City and Sheffield Wednesday. So far, none have been suitably impressed to make the move permanent.

Bridcutt, a player who Poyet, seemingly under no duress whatsoever, went on record saying he would take to Real Madrid if he ended up managing there, endured an equally disappointing time in the north east. Leeds have since provided him with an escape route following a successful loan spell.

Looking a bit further back, Steve Bruce once splurged £12m of Sunderland’s money on Connor Wickham, after the Ipswich Town propaganda machine convinced him the striker was the next Alan Shearer.

Wickham remains one of their better buys from the Championship, but only those with the loosest definitions of the word would consider his Black Cats career a success.

Other relatively-recent acquisitions from the second-highest level of English football include Michael Chopra, Paul McShane, Dickson Etuhu and Kenwyne Jones, with the arguably latter the only viable exception in a batch of badly-advised buys.

Mawson would be a decent signing if Sunderland had to time to develop his game, but hurling him straight in to plug the hole vacated by the player widely considered their best defender represents a monster gamble.

His prospective future employers can currently be backed at 6/4 to be relegated after their 2-1 defeat to local rivals Middlesbrough last weekend.