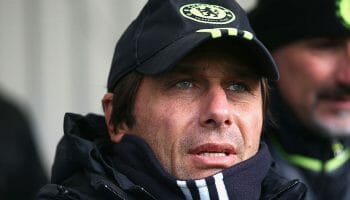 Few of Roman Abramovich’s many managerial hires since he took over at Stamford Bridge have matched the impact of Jose Mourinho’s bombastic arrival in 2004, but the dismal end to the Portuguese’s second stint has tarnished his legacy and left the Blues faithful ready for a new hero.

In Antonio Conte, Abramovich looks to have recruited a born winner and Chelsea’s promising start is already healing the wounds of last season. The following graphic breaks down some of the more interesting numbers from the Italian’s start to life in the Premier League:

With 12 top-flight games played so far, Conte’s side have already amassed more than twice as many points as they had at this stage in 2015/16 – 28 compared with 11 – and sit proudly at the top of the table. Mourinho’s first dozen outings last season saw them reach their lowest ebb, languishing in 16th place with a whopping 23 goals conceded – while this time around they have only shipped nine.

In racking up his sixth straight league win without conceding a goal at Middlesbrough last weekend, Conte has already equalled one of his predecessor’s records. While four other Premier League managers have won six games to nil in a row – Sir Alex Ferguson, Manuel Pellegrini, Rafael Benitez and another former Blues boss, Carlo Ancelotti – only Mourinho had achieved this in his debut season, before Conte replicated the feat.

The new manager also deserves credit for restoring Eden Hazard to his best, with the Belgian wizard’s dismal showing last season already a distant memory. In his first three Premier League campaigns at Chelsea, Hazard was contributing an impressive average of around 0.6 goals per 90 minutes (based on goals scored plus assists made), but this dropped by over half to just 0.27 last term. With seven goals and one assist already this term, his contribution is at its highest rate ever and he has already surpassed last season’s tally (four goals and three assists).

Finally, the Blues’ points tally bodes well for their prospects of making an immediate return to the Champions League. Since the Premier League was reduced to 20 teams in 1995, 21 sides have matched Chelsea’s current tally after 12 matches and all but two of them have gone on to finish in the top four. The exceptions – Liverpool in 2002/3 and Aston Villa (remember them?) in 1998/99 – were overshadowed by the success of others: two thirds went on to finish the season in either first or second place.

With Tottenham visiting on Saturday and a trip to Manchester City looming afterwards, Conte’s impressive run may not last too much longer, although Spurs have never won a Premier League game at Stamford Bridge. However, it looks like he’s already built the foundations for a successful spell that will keep even the club’s notoriously fickle owner happy.