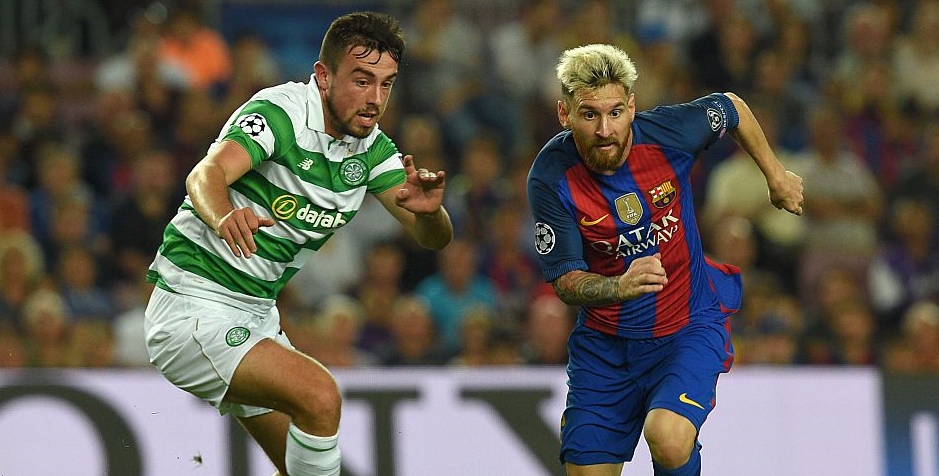 * Barcelona are in 18th place in shots per game in this season’s Champions League, with an average of 11.5
* After four games Barcelona are the top scorers in the competition with 14 goals, two more than nearest rivals Arsenal and Real Madrid
* Lionel Messi is the top scorer in the competition with seven goals, three more than Mesut Ozil, Robert Lewandowski and Edinson Cavani

Celtic’s slim hopes of qualifying for the Champions League knockout stage virtually ended when they picked up just a point from their two games against Borussia Monchengladbach. Even the Europa League looks out of reach with this home match against Barca and a trip to Manchester City concluding their campaign.

The Hoops were put to the sword in September when Lionel Messi scored a hat-trick in a 7-0 thrashing, a record defeat for Celtic in Europe. Brendan Rodgers’ men could console themselves that they remain unbeaten in the league and have kept six successive clean sheets as part of a seven-match winning run, but the Scottish Premiership and La Liga – and Barcelona in particular – are different animals.

Is there any hope for Celtic? Messi may not be his usual sparkling self after missing the goalless draw against nine-man Malaga with an illness, but he was fit enough to travel. The Scottish champions also famously beat a very strong Barcelona team four years ago, and Moussa Dembele has taken a shine to the Champions League with three goals this season which makes odds of 9/4 to score any time appealing.

Barcelona misfired at the weekend when they could only draw at home to Malaga, who played the last 22 minutes with 10 men before they lost another player to a red card in stoppage time. Messi missed the game through illness and Luis Suarez was suspended, but both will be back for the trip to Glasgow. Barca could qualify as Group A winners if they secure victory and Manchester City fail to beat Borussia Monchengladbach so there is some pressure to deliver.

With Barcelona’s odds to win understandably short, we like the look of Messi to be first goalscorer at 11/4. The Argentina forward has scored first in three of the last five games in which he has played and also broke the deadlock against Celtic on matchday one. He may not be feeling 100 per cent, but eight goals in his last six matches is a statistic hard to ignore.

Bearing in mind Messi scored a treble the last time the teams met, evens also looks a cracking bet on the Argentinian to score and for Barcelona to win. One usually follows the other! Finally, we also think there is good value in the draw/Barcelona win at 3/1 in the half-time/full-time market. Barcelona have been drawing at half-time in their last four matches and although Manchester City and Sevilla are different class to Celtic, the crowd at Parkhead is in a league of its own on European nights like this one and coach Luis Enrique has warned his players not to read anything into the reverse fixture in Spain.

“It is going to be a different game completely,” he said. “We have to be ready for everything. It is good to score early in all games but Celtic need points so they will come out but again I say it will be different, it will be nothing like the game that we had before.”

33/1 shot catches the eye in UK Championship snooker betting
Move over Jose: Chelsea have found a new ‘Special One’
Author