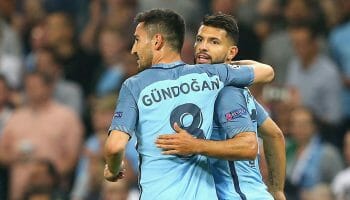 We have crunched the numbers to find the five best teams in Europe to back on Saturday and our Acca Insurance offer means all is not lost if only one of them lets you down.

Select five or more teams at odds of 1/5 or greater in an accumulator, with games played on the same day and a minimum bet of £5, and if just one team loses we will refund your stake as a FreeBet up to £25.

Below are our tips for this weekend, with a £10 accumulator returning around £85 if they all do the business.

Burnley have made an impressive start to sit 12th in the table but the statistics suggest they are fortunate not be in the relegation zone. They have taken the fewest shots in the Premier League (8.6 per match) and only Hull have faced more (20.3), and that is a worry as they prepare to face a City team averaging more than two goals a game.

Newcastle have won eight matches in a row after brushing aside in-form Leeds last weekend and should have no trouble extending that run at home to a Blackburn team languishing in the relegation zone. The Magpies have scored at least two goals in 11 of their 17 games – the best in the division – while Blackburn have managed just one clean sheet so far and have taken the third-fewest shots in the Championship.

Marseille’s Ligue 1 wins this season have all been at home to teams beneath them and 12 of the 13 goals they have conceded have been away. They face a tough trip to Monaco, who are second having scored an eye-watering 39 goals in 13 games and fresh from beating Tottenham in the Champions League.

Espanyol have only conceded in one of their last six games and would be sitting far higher than 12th in Spain’s Primera Division with some better luck. Leganes are two points behind in 15th but no team has suffered more defeats than their seven and they only ended a four-match losing streak with a home win against struggling Osasuna last weekend.

Only three places separate these two teams in Serie A but they are in very different form. Chievo have only taken one point from a possible 15 against teams above them while Torino have only lost one of their last 10 matches. They remain unbeaten at home and have racked up some big wins there, with only Roma having scored more goals in Serie A this season. In contrast, Chievo have only scored four goals in six games and they were without a win in five matches before edging out Cagliari 1-0 last weekend.