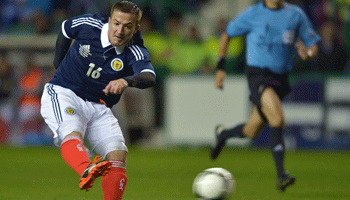 Nottingham Forest and Aston Villa were both active on transfer deadline day, highlighting how things have not gone to plan in the Championship so far this season ahead of their clash on Saturday evening.

Forest did end Tuesday night in a better mood, though, as they took striker Ross McCormack on loan from this weekend’s opponents and claimed a win over Rotherham while Villa boss Steve Bruce was scathing of his side’s performance in a poor loss at Brentford.

McCormack and fellow loan signing Aaron Tshibola will not be available against their parent club but Forest did also bring in front man Zach Clough, midfielder Joao Teixeira and winger Gboly Ariyibi in a productive end to the January window.

“We are making sure we get ourselves into a sensible place in the league where a squad of this quality should be,” commented caretaker boss Gary Brazil following a workmanlike 2-0 defeat of Rotherham at the City Ground.

Having also beaten Bristol City in their previous home match, things are starting to look up for Forest and they could be value at 2/1 to now see off a more talented but out of sorts Villa side.

Bruce won’t have been disappointed to see the back of McCormack for now and landed a more than adequate replacement in highly-rated Brentford striker Scott Hogan, for a fee which could reportedly go up to as much as £12million with add-ons.

However, Hogan will need to make an immediate impact if he is to lift a Villa side which was jeered off the park by their own fans following a 3-0 hammering at Brentford and Bruce admitted: “That was the worst so far here and arguably my worst game in years. As soon as they scored we collapsed and that is unacceptable.”

Villa are clearly low on confidence after losing four of their last five games and letting a 2-0 lead slip when drawing the other, so 11/10 for Forest in the ‘draw no bet’ market is another tempting price while 10/1 for a 2-1 home win appeals in the correct score list.