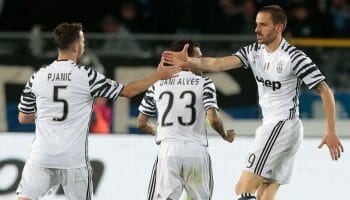 Punters face a tricky conundrum as Juventus entertain Torino in Serie A between their two Champions League semi-final clashes with Monaco.

With a nine-point lead at the top of the table, Massimiliano Allegri can afford to rest players, but Juve will still be keen to preserve their 100 per cent home record in this competition.

We’re taking 8/5 for the leaders to prevail and both teams to score in our Juventus vs Torino betting tips.

Juventus can be crowned Italian champions for the sixth straight season this weekend if they beat Torino and Roma fail to win at AC Milan.

Their home form has been simply outstanding, with 44 goals scored and just eight conceded in 17 straight victories at this venue.

Allegri shuffled his pack after both games against Barcelona in the European Cup but still came up with a 2-0 victory at Pescara and a 4-0 hammering of Genoa in Turin.

A Look At Torino’s Betting Odds

Torino are having another solid campaign and go into this match on the back of a six-game unbeaten run following last week’s 1-1 home draw against Sampdoria.

Despite being a defensive midfielder in his playing days, manager Sinisa Mihajlovic does like his teams to get forward and only the top three in the table have scored more goals this term.

Belotti opened the scoring in a 3-1 home loss to Juve back in December and can be backed at 7/4 to strike at any time here.