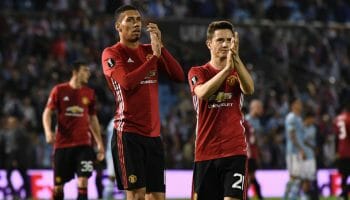 Manchester United put in a strong performance when beating Celta Vigo in Spain and we aren’t expecting any dramas for the Red Devils in the second leg of this Europa League semi-final.

Celta have claimed 2-0 victories in three of their last four away games in this competition, but United have gone 17 European matches at Old Trafford without defeat.

The Premier League team look a cut above in every department and we’re taking 27/4 for a 2-0 home win in our Man Utd vs Celta Vigo betting tips.

Marcus Rashford’s superbly-struck free-kick in the 67th minute eventually settled the first leg at Balaidos, but Manchester United should really have been in control of this tie well before then.

Both Jesse Lingard and Henrikh Mkhitaryan had clear-cut chances to put Jose Mourinho’s side in front, while Rashford had another long-range effort well saved by Sergio Alvarez.

“Alvarez had a couple of very important saves and the way we started the game and controlled the game in the first half, I think we deserve a better result,” said Mourinho.

United will look to strike earlier at home and then close the game down, so let’s take 6/5 for the Red Devils to be leading at half-time and full-time.

It could all have been different for Celta Vigo if Daniel Wass hadn’t wasted a free header at the back post early on, with an already fired-up home crowd ready to explode at that point.

However, the Spanish outfit were pretty much restricted to speculative long-range attempts after that, with just one deflected shot from Pione Sisto testing Sergio Romero.

Coach Eduardo Berizzo insisted: “We are going to play a second game having learned what happened here. We often leave with an adverse result from the first leg and that should stimulate us to face the match in England.”