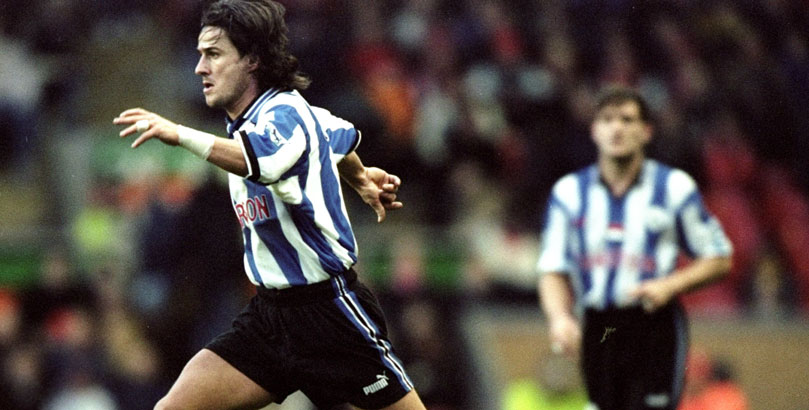 Benito Carbone endeared himself to the fans of Sheffield Wednesday and Bradford and helped Aston Villa reach an FA Cup final during his six-year spell in England. In an exclusive interview, he gives us his thoughts on the season so far for his former clubs.

Carlos Carvalhal has led Sheffield Wednesday to back-to-back play-off finishes. What do you make of the job he has done?

He has done a great job, when there were no expectations. When they weren’t supposed to win anything he led the team to the play-offs.

The chairman has backed him heavily in the transfer market. Has he got to lead them to promotion to keep his job?

Absolutely! If your boss decides to win a championship, that must be your only target. No matter how you achieve it, you can win the season but you can also finish in second place and then win the play-offs.

Look at what Verona did last year; it was a team built to win a straight promotion, but they reached Serie A via the play-offs. You can experience adverse circumstances, but when you are given a project like that, winning is your key responsibility.

What are your thoughts on Fernando Forestieri? Is he, for you, one of the best players outside of the Premier League? Do you see some similarities with him to you in terms of how he plays the game?

Absolutely no, we are quite different kind of players. But I really like him – he is essential for Sheffield Wednesday.

It has been 17 years since the Owls were last in the Premier League. Looking from afar, why do you think they have been out of the top division for so long?

I don’t know all the developments and dynamics about previous years but the fact is Sheffield Wednesday cannot afford to stay away from the Premier League for so long. It is one of the most ancient and historical clubs in England, so I think they rightfully owe a place in Premier League. They’ve been on the verge, so I guess “on the day they will hire me, we’ll get it done!”

Will it only get harder for them to get promoted the longer they are out of the Premier League with the money and parachute payments teams are coming down with?

I actually think that it’s all a matter of planning. They merely scraped by for a while, until the current chairman arrived. Once that you have someone who is willing to invest, it’s just a matter of time.

What do you think it would do for the city of Sheffield if Wednesday got promoted?

I said before Sheffield Wednesday MUST be in the Premier League. Heaven forbid United do it and they don’t!

A third of the teams in the Championship are managed by foreign bosses. Why do you think we have seen such a big rise in foreign managers in the league?

Football has evolved over the years, so many European managers got there bringing their own ideas. In the Championship we no longer see long ball and second ball-based play, now we can see people playing football.

How vital is it for a manager or player to quickly learn the language and adapt to the culture?

The best quality for a trainer/manager is to let your players get what you want to address them. This is by far the most crucial side of a manager’s job.

When you were with Aston Villa, how important was the chat with John Gregory before the FA Cup fifth-round game against Leeds, where you scored a hat trick in what you describe as your best moment in England? What did he say to you?

It was fundamental, a real game-changer. The day before I was in trouble, very down in the dumps and had just asked him to set me free to come back to Italy. He answered kind of “You want to go home? Then go home… in Birmingham. Just go, have a hot bath, relax, then tomorrow come back here and you will score a double” I scored a hat-trick!

He always believed in me, he picked me to raise the quality of the team, even though there were already guys like Paul Merson. It was one of the most important clubs in my career and to play at Villa Park is so charming!

Is that FA Cup run with Villa the best moment of your career?

Those years, from 24 to 30, were my best ones. My only regret is that I didn’t get a chance to play for an elite club to make a breakthrough. Gianluca Vialli’s Chelsea looked for me once but we didn’t have a deal.

The club is unfortunately fighting to get back into the Premier League. Do you think the club can return to the top flight this season? Does it upset you seeing them in the Championship?

This is another club that there’s no way you can see it in the Championship. A bad year can happen but you have to come back up immediately. I’ve seen they strengthened the roster and they have to do it or they will end up like Sheffield Wednesday. Sure it hurt me seeing them go down.

At the end of the day, every single club I played for, every single jersey I wore left me something in my heart. Sheffield was probably my best time, the one in which I shared the most with supporters. But, as I said before, playing for Aston Villa was both an honour and a pleasure.

Have you been following Villa from afar? If so, who has impressed you? What have you made of John Terry’s performances for the club?

I’ve seen he is currently injured but his career, personality, charm and history are not up for debate. The fact he was made captain says it all.

Do you still follow Bradford City’s fortunes? Have you seen any of the team’s games recently?

Yes, I follow them too. As like Sheffield Wednesday, they reached the play-offs but missed the final step. I follow them with kind affection and I think they too have to be patient and able to plan. The current manager [Stuart McCall] was a team-mate of mine.

How did you rate Stuart McCall as a player?

It was one of those cases when you thought “He will be a manager”.  I can remember him giving instructions to everybody on the field. I always respected him, unfortunately we had a bad year then, the team picked some big names, but most of them were in the late years of their careers. The supporters were great and I was upset for that situation that was really bad for me, the club, the manager. But, as usual, the hardest time was for the supporters.

Did you think then that Stuart had the ability to go on and be a successful manager?

Who knows? I can’t know that. As a player, he always let me think he would be capable to do it. Time – and his job above all – will tell if he will become an elite manager. I don’t know his ideas, so I can’t really say much more.

1 Your selection
2 Start Playing
Register, deposit £10 or more and place a Sport bet (3+ selections) up to £20, each with odds of 1/2 (1.5) or greater.
3 Get your FreeBet
If it’s not a winning bet, you’ll get up to £20 back as a FreeBet. T&Cs apply
Bet now! Log in
X
Joburg Open: Oosthuizen to produce perfect response
Villarreal vs Barcelona: El Madrigal stalemate may prove value
Author