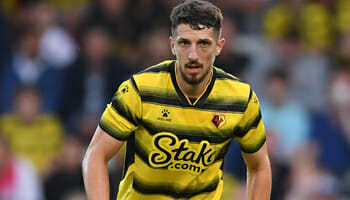 Brighton only managed four home wins in the Premier League last season and, even with crowds back, offer little appeal at odds-on versus Watford.

The Hornets claimed two consecutive draws at this venue before being relegated and return in good spirits after beating Aston Villa last week.

We think 23/10 for another stalemate is the value option for our first Brighton vs Watford prediction.

Brighton also began the new campaign with a victory when coming from behind to prevail 2-1 at Burnley.

Albion conceded in just the second minute when James Tarkowski’s header was allowed to stand, despite the defender appearing to foul Neal Maupay.

The Clarets should really have increased their lead in the opening period, hitting the woodwork twice, but Brighton improved markedly after the break.

Maupay levelled things up on 73 minutes and Alexis Mac Allister grabbed what proved to be the decider soon after.

“But as a team there is more to come. Our goal this season is to try to finish in the top 10 and that’s what we are working towards.”

Even so, we can’t get past the fact that Brighton have only averaged five home wins a season over the last three campaigns.

Looking at the 6/1 catches the eye.

Aaron Connolly is back in contention for Brighton after missing out last weekend due to “personal reasons” but Danny Welbeck and Tariq Lamptey remain sidelined with hamstring problems and Joel Veltman will be absent due to self-isolation.

Watford were outstanding for the first 70 minutes of their clash with Aston Villa at Vicarage Road, storming 3-0 ahead.

Emmanuel Dennis struck early on, Ismaila Sarr benefited from a fortunate deflection and Cucho Hernandez came off the bench to curl in a cracker.

John McGinn responded for Villa with a fine half-volley and Danny Ings converted a stoppage-time penalty but the Hornets held on.

“This is perfect for me,” beamed manager Xisco Munoz. “It’s not only those who start but those who came off the bench also gave a very good level and this is important.”

Sarr caused problems for Villa’s defence throughout the game and looks to have matured well since netting five top-flight goals a couple of seasons ago.

The Senegal international bagged 13 in the Championship last term and appeals at 7/2 to score at any time here in our Brighton vs Watford betting tips.

Josh King could be in line for his Watford debut after recovering from a minor groin injury. Kiko Femenia is also available after building up his fitness but midfielder Juraj Kucka is expected to miss out with a thigh injury.