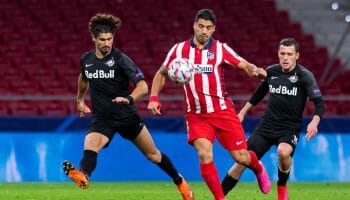 Second place in Champions League Group A is up for grabs when RB Salzburg host Atletico Madrid in what could be one of the most exciting ties in the final round of matches.

Atletico have a two-point advantage over their hosts and will qualify for the last 16 if they avoid defeat in Austria, with Salzburg knowing they must win.

A defeat could see them drop out of Europe if Lokomotiv Moscow beat group winners Bayern Munich, so there is plenty at stake and we fancy the visitors to earn the draw they need at 11/4 as our opening RB Salzburg vs Atletico Madrid prediction.

It was a first win of the campaign for the Austrians, who had been held to a 2-2 draw by Lokomotiv in their opener and then suffered three straight defeats against Atletico and Bayern (twice).

With only four points on the board, they are fortunate to still have a chance of going through and somehow their destiny is in their own hands heading into the final match.

They created enough chances in their 3-2 defeat in Madrid to give them confidence of getting the result they needed, although Saturday’s 1-0 defeat at Admira Wacker saw them relinquish top spot in the Austrian league.

The big worry this week is whether they have the creativity to break down Atletico’s defence with the visitors knowing a point is all they need.

We certainly think that should lead to a cagey encounter and under 2.5 goals at RB Salzburg vs Atletico Madrid odds.

Atletico may still be kicking themselves for not getting the job done last week when they had the chance.

Joao Felix put Atletico ahead midway through the first half against a largely second-string Bayern, who had already qualified.

Diego Simeone’s men could not hold out though and a late Thomas Muller penalty meant the qualification scrap will go to the wire.

That was Atletico’s third successive draw in the Champions League but on a positive note they look as solid as ever in defence.

Muller’s spot-kick was the only goal Atletico have conceded in their last six matches in all competitions, with one of their clean sheets coming against Barcelona last month.

The domestic leaders have only conceded twice in 10 Liga matches this season so will back themselves to hold out here and a 0-0 draw at 17/2 is our final RB Salzburg vs Atletico Madrid prediction.