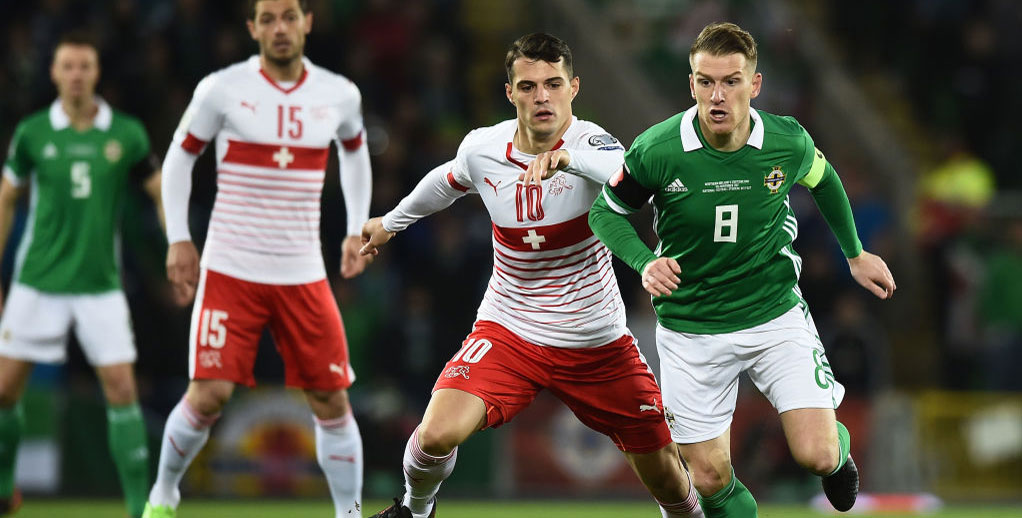 Northern Ireland were left incensed after a controversial penalty decision decided the first leg of their World Cup play-off with Switzerland and it’s hard to see the underdogs battling back in Basel on Sunday.

The handball ruling which allowed Ricardo Rodriguez to score from the spot just before the hour mark was incredibly harsh, but the Swiss did look much the better team at Windsor Park.

Having won all their group-stage games at St Jakob-Park, Vladimir Petkovic’s side are a solid pick at 21/20 to again win to nil in the second encounter for our Switzerland vs Northern Ireland betting predictions.

With Stoke star Xherdan Shaqiri and Arsenal’s Granit Xhaka controlling play in midfield, it was easy to see how Switzerland had won nine straight World Cup qualifiers before being pipped to top spot in their pool by Portugal.

The Swiss had 65 per cent of the possession in Belfast and 16 attempts on goal, compared to five for the hosts, as they displayed their superior technical ability.

Shaqiri was the biggest threat, with his strike leading to the penalty, while he also laid on a first-half chance for Haris Seferovic with a glorious ball and bent a shot narrowly over the bar.

“We controlled the game over 90 minutes, had a lot of possession and created chances,” said the playmaker. “We played much better than Northern Ireland and deserved to win.”

Petkovic added: “We deserved to win. Only because of our lack of finishing do we talk about the penalty.”

The Swiss only conceded in one of their five home wins in Group B and we like 5/1 for a 2-0 triumph here from the Switzerland vs Northern Ireland odds.

Northern Ireland’s hopes of reaching a first World Cup since 1986 took a huge blow when Corry Evans was harshly deemed to have handled inside the area, as the ball clearly struck the defender’s shoulder.

Six wins from their 10 Group C matches had been a sterling effort, but Michael O’Neill’s side did pick up only one point from away trips to Germany, Norway and the Czech Republic.

The Irish failed to score on all three of those road trips and that lack of attacking firepower was again evident when they didn’t manage a shot on target against the Swiss.

O’Neill’s gameplan in Basel may still be to keep things tight early on and then hope to pinch a goal in the second half.

That theory makes 29/20 for the second leg to be 0-0 at half-time worth including in our Switzerland vs Northern Ireland betting tips.