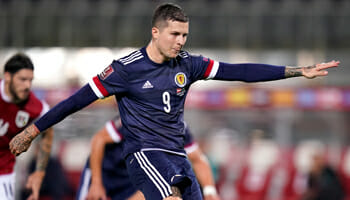 Few national teams are as familiar with each other as Scotland and Israel, who will be meeting for the seventh time in three years.

All of the other six games have been incredibly competitive, with three draws in normal time and the same number of one-goal victories.

With just a single point separating them after six rounds of fixtures in World Cup Group F, another tight tussle has to be anticipated.

We’re taking 21/20 for the scores to be level at half-time as our first Scotland vs Israel prediction.

Scotland famously prevailed on penalties in a Euro 2020 play-off 12 months ago and have also taken four points from two Nations League encounters on home turf.

March’s Tel Aviv meeting finished 1-1 and the Scots do have a slight advantage in the race to advance from this pool alongside Denmark.

Steve Clarke’s side lost away to the runaway leaders last month but are unbeaten in five other fixtures.

They drew with Austria at home early on but prevailed 1-0 in Vienna last time out after scraping past Moldova by the same scoreline, with Faroe Islands thrashed 4-0.

Crucially, Clarke has few injury and illness issues to contend with on this occasion, with almost all of his key players performing well for their clubs.

Lyndon Dykes was the match-winner versus Moldova and Austria and warmed up for this contest by netting first in QPR’s 3-2 victory over Preston, his fourth Championship goal.

The 25-year-old is backed to break the deadlock again here in our Scotland vs Israel betting tips.

Israel kicked off their campaign by losing 2-0 at home to Denmark and were thrashed 5-0 in Copenhagen last time out.

However, head coach Willibald Ruttensteiner will be very satisfied with their results in between.

The Blue and Whites followed up the draw with Scotland by prevailing 4-1 in Moldova.

Last month, Israel enjoyed a 4-0 win away to Faroe Islands and then romped to a 5-2 success when hosting Austria.

Hoffenheim forward Munas Dabour has also done well this term for club and country, while 22-year-old midfielder Manor Soloman is a regular for Shakhtar.

With Celtic’s Nir Bitton and Bibras Natkho being proven performers in the engine room, Israel have a useful blend of youth and experience.

Looking at the 6/1 for a third 1-1 stalemate in five head-to-head encounters.