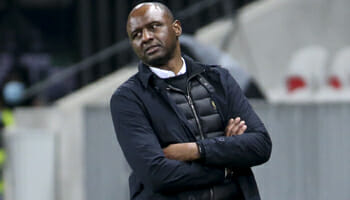 Crystal Palace were left fuming by Brighton’s late equaliser on Monday night but can take out their frustrations on Leicester.

The Eagles are now adjusting well to the changes implemented by Patrick Vieira and look set to pick up plenty of Premier League points on home turf.

We reckon 11/5 for the London outfit to prevail here is great value for our first Crystal Palace vs Leicester prediction.

Palace claimed a deserved lead versus Brighton through Wilfried Zaha’s penalty on the stroke of half-time and Jordan Ayew should have doubled the advantage.

The Eagles were eventually made to pay for that and other misses when Neal Maupay levelled for the visitors in the 95th minute.

That equaliser prompted some ugly scenes between those fierce rivals but it was still another positive display by Palace against high-flying Albion.

Vieira has transformed the Eagles from the rigidness of the old regime to a dynamic possession-based team who press frantically from the front.

After some early teething troubles, a fine 2-2 draw at West Ham was followed up by a 3-0 defeat of Tottenham at Selhurst Park.

New additions Marc Guehi, Joachim Andersen and Conor Gallagher have made an instant impact and hopes are high for a good campaign.

“You can see the new players are all settling well, they are playing well and the team is improving,” captain Luka Milivojevic said.

Looking at the 19/4 for a home win and both teams to score.

Palace have no new injury concerns but Nathan Ferguson and Ebere Eze (both Achilles) remain long-term absentees, although they continue to make good progress with their respective recoveries.

Leicester have been struggling to overcome some defensive injury issues and were again fragile at the back in a 2-2 home draw with Burnley.

Jamie Vardy made amends for an early own goal by bagging a brace at the right end, but that result left the Foxes down in 13th, just a point above Palace.

“I’m a little frustrated in terms of the result,” said Brendan Rodgers. “We were much better going forward and scored two excellent goals.

“I’m more worried about how we defended, but overall we created enough opportunities and a point was deserved in the end.”

City have already lost away to West Ham and Brighton this season and must travel to Selhurst Park following a trip to Poland, where they lost 1-0 to Legia Warsaw in the Europa League.

They have conceded first in four of their last five Premier League matches and may be caught out by Palace’s high-tempo gameplan at the start of this contest.

Let’s add 19/10 for the Eagles to break the deadlock in the first half to our Crystal Palace vs Leicester betting tips.

Kelechi Iheanacho is available after being denied entry to Poland on Wednesday due to a problem with his travel documents.

Wilfred Ndidi is back after being suspended for the trip but Jonny Evans (foot) remains a doubt while Wesley Fofana (broken leg) and James Justin (knee) are out.