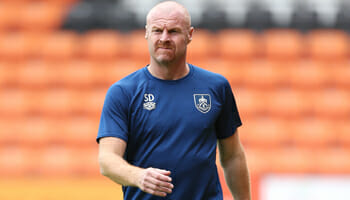 Burnley and Norwich are propping up the Premier League table and still searching for a first win of the campaign ahead of this basement clash.

The Clarets have only collected two points and visitors City are rooted to bottom spot following six straight losses.

Sean Dyche’s side haven’t won at home in the league since January, but can bring that long stretch to an end here.

We fancy them to shade this at 10/11 as our first Burnley vs Norwich prediction.

It has been a testing start to the season for Burnley, but things could be about to take a turn for the better, with a confidence-boosting EFL cup win over Rochdale followed by a 2-2 draw at Leicester last weekend.

There is still a worrying winless run at Turf Moor of 13 top-flight games to consider but Dyche will be hoping the arrival of the Premier League’s basement dwellers can signal an end to that trend.

Maxwell Cornet, who cost the Clarets £15million in the summer, bagged his first Burnley goal in the draw with Leicester but then sustained a hamstring injury.

Chris Wood will be Burnley’s main attacking threat once more and is Burnley vs Norwich odds to open the scoring.

Matej Vydra and Jay Rodriguez are likely to be in contention after back and hamstring issues respectively. Kevin Long, Dale Stephens and Connor Roberts remain sidelined.

There are few positives to take from the opening weeks of the season for Norwich, who look destined for a quick return to the Championship.

Yet to pick up a point and only two goals to their name, it is hard to see where the results are going to come from, especially when they also have officially the worst defence in the division.

Both of their goals have come from the boot of Finnish striker Teemu Pukki, who netted 11 times the last time the Canaries were in the top flight.

However, he will have to at least match that tally if Daniel Farke’s side are to have any chance of staving off relegation.

The last two Premier League meetings between these teams ended up 2-0 to the Clarets and a repeat of that scoreline is available at 17/2 as the last of our Burnley vs Norwich betting tips.

Norwich will check on Billy Gilmour, who picked up a foot problem during training this week.

Christoph Zimmermann (ankle) is expected to return following the international break, while Todd Cantwell remains unavailable because of personal reasons.