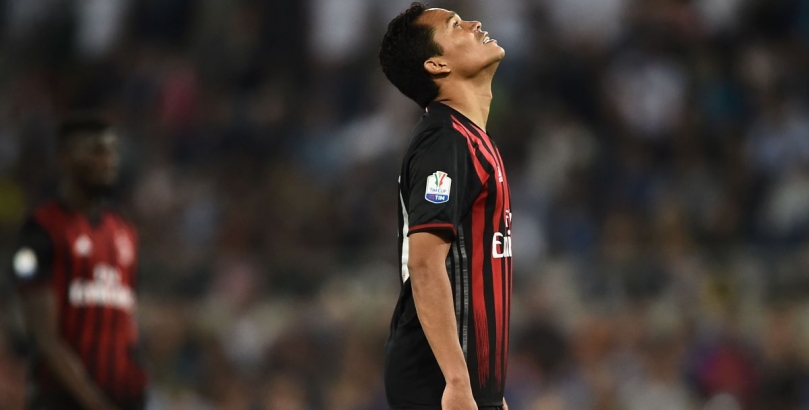 It is difficult to know whether the perception that a move from seven-time European champions AC Milan to West Ham would represent career progression for Carlos Bacca is more a sign of the Premier League’s current enormity or of the Rossoneri’s stagnation.

After all, both clubs placed seventh in their leagues and there is no reason for the Italian giants to want rid of the 29-year-old after he rewarded their £21 million investment last summer with 18 goals in 36 Serie A starts, a tally only bettered by Gonzalo Higuain and Paulo Dybala for the top two.

However, the latest speculation is that a deal won’t be struck, with the Irons having a £15 million bid rejected and not yet returning with an improved offer, and it might be a blessing, as there are several reasons to suspect that he isn’t the perfect fit for their 8/1-rated top-four challenge.

One consideration when compared to other reported targets like Alexandre Lacazette and Michy Batshuayi is the lack of resale value provided by a player a few months shy of his 30th birthday.

Yet the bigger concern is that even though he adjusted well to Spain and Italy, none of the five Colombian strikers to head to the Premier League in the past excelled despite obvious potential.

The most memorable and recent was of course Radamel Falcao, who after seven successive double-figure seasons – scoring 34 or more in four of the final five – managed just 15 top-flight starts and five goals across campaigns on loan at first Manchester United and then Chelsea.

But the pattern commenced over 20 years ago when Faustino Asprilla joined a Newcastle side top of the table and appeared to unsettle them – they lost four of his first six starts and never recovered, while he signed off that initial half-term with three goals in 14 outings.

Juan Pablo Angel struggled to justify Aston Villa’s decision to break their transfer record for him in 2001, firing once in the league in his opening six months and 13 times in the next two complete seasons. He did get better to stick around for six years and depart on 44 strikes in 175 games, but he never delivered on his fee.

The same was true of Hugo Rodallega, bought by Wigan for £4.5 million in 2009. His four-and-a-half years in the north west yielded 24 goals in 112 league matches. Hamilton Ricard at Middlesbrough was the best of the bunch, albeit benefitting from a slimmer fee (£2 million) and still netting only 33 times in 115 league contests across the top two tiers.

Indeed, in addition to being spread across a 20-year period, the problems of Colombian attacking talents adapting to the Premier League even seems to affect those who operate on the flanks.

Chelsea spent £23.3 million on Juan Cuadrado in February 2015 and started him four times, while Victor Ibarbo managed just four cameos for Watford in 2015/16.

Six reasons why Garbine Muguruza will deny Serena Williams at the French Open
One to sign, one to sell and one to keep for Tottenham this summer
Author