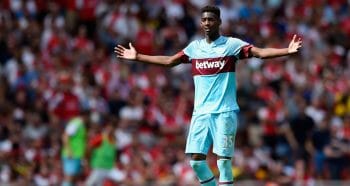 The 16-year-old – whose team’s Premier League betting odds of 8/5 to finish in the top half – was lavished with praise for the commanding performance he produced at the Emirates on his Premier League bow, helping the Irons to a shock 2-0 win over Arsenal.

However, to make the grade in news.bwin.com’s team of brainboxes to have graced English football’s top flight, Oxford’s considerable on-pitch talent must be transferrable to the classroom.

Excelling in academia as well as soccer, these pro-baller poindexters either ply their trade in the Premier League, or did at an earlier stage of their careers and it’ll take more than a few A*s to relegate one to the bench.

Had their football skills sold them short, David Wetherall and Nedum Onouha could have easily earned their living in the laboratory, with the former graduating with a first class honours degree in chemistry and the latter reportedly knocking back the chance to follow his mum into medicine to turn pro with Man City.

Left-wing-back Graeme Le Saux outed himself as a Guardian reader in the late 1990s, as well as revealing he ditched studies of environmental sciences to concentrate on football.

After allegedly being caught trying to steal toilet seats from hardware magnates, Glen Johnson’s inclusion can be questioned, but anyone willing to embark upon on a maths degree must have something between their ears.

Frank Lampard earned the nickname ‘the Professor’ amongst his envious Chelsea colleagues for reportedly outscoring Carol Voderman in a 2012 IQ test (though John Terry’s coming third out of the participating Blues players perhaps taints the result).

Up front, Romelu Lukaku’s ability to speak five languages fluently despite recently turning 22 is especially astounding, though not quite as much as former West Ham and Southampton spanner-wielder Iain Dowie boasting a Masters in engineering. He was once a part of Britain’s space programme before turning pro.

While the talent in the team is considerable, any outfit coached by this crack team of cap and cloth-clad tacticians couldn’t go wrong.

Arsene Wenger and Steve Coppell’s degrees in economics would ensure the best players were signed at the right price, while law master Slaven Bilic would ensure everyone was clued up on the rules of the game.

Manuel ‘El Ingeniero’ Pellegrini, a civil engineer, would fashion the optimum way of playing and Gerard Houllier, a former English teacher, would help any foreign imports learn the mother tongue.