The WWE SummerSlam 2015 main event pits Brock Lesnar against The Undertaker in a match dubiously billed as being “too big for WrestleMania”.

The Undertaker is bidding to avenge the WrestleMania 30 loss that cost him his 21-0 undefeated streak on the grandest stage of them all and he is a 2/5 favourite on bwin.com to do exactly that, with Lesnar 7/4 to beat him all over again.

It would be a poetic triumph as well because, while WrestleMania was The Undertaker’s home turf, Lesnar is a SummerSlam guy. To prove it, we totted up the win-loss records of everyone competing in singles action this weekend who has been to the show before: 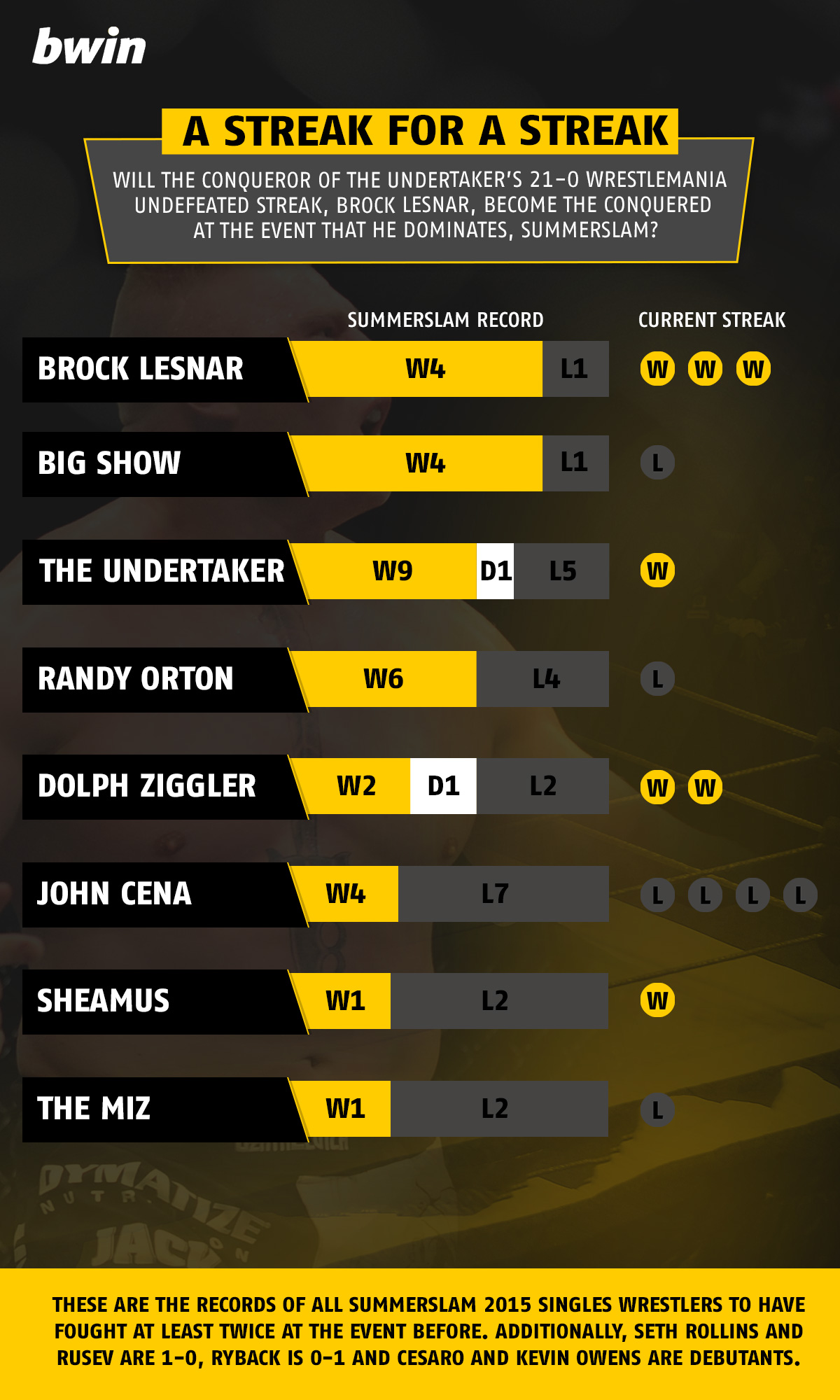 “The Beast” hasn’t been bettered at the August spectacle since falling to Kurt Angle in 2003, winning all three outings since his 2012 return against the Hall of Fame-bound trio of Triple H, CM Punk and John Cena.

Beyond that, the graphic’s two most intriguing insights are the surprise success rate of Big Show, who is 8/1 to leave with the Intercontinental Title, and the dismal form of perceived serial winner Cena.

The company’s poster boy is in a WWE champion versus US champion title-versus-title showdown with Seth Rollins in which he has an opportunity to equal Ric Flair’s record of 16 world championship reigns, yet he has suffered four successive SummerSlam defeats.

That is the longest sequence either positive or negative of anyone on the card and is expected to continue, with Cena the 7/4 outsider to Rollins’ 2/5 valuation.

However, there are several trends which indicate that Rollins will struggle to get out of Brooklyn still in possession of the WWE’s top prize, which opponent Cena and Money in the Bank holder Sheamus – who is 8/11 to “cash in” his title shot on Sunday night – both have designs on:

Brock Lesnar and The Undertaker have fought on pay-per-view five times before – four times in one-on-one action and once as the last men standing in a Royal Rumble – and 7/4 underdog Lesnar has never been beaten. He won the most recent four; the first was a no contest.

Twelve of the 15 SummerSlam main events this century were decided by pinfall, with two submissions and one title retrieval in a ladder match. bwin.com have an exclusive market on how Brock Lesnar v Undertaker will finish, with Taker 1/2 to win by pinfall and Lesnar 19/10.

All three titles that were defended at SummerSlam last year changed hands – the first time this had happened in the 21st century. Ryback may therefore be more vulnerable than his 1/5 odds to retain his Intercontinental strap suggest. The Miz is 5/1 to dethrone him, with Big Show an 8/1 shot.