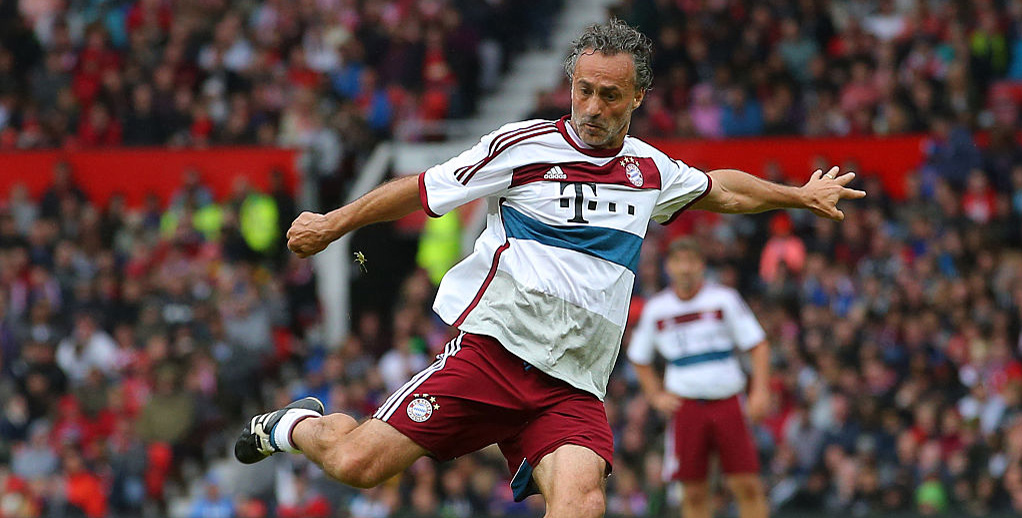 Former Germany international Maurizio Gaudino discusses his loan spell at Manchester City during the 1994/95 season, the difference between English and German football and his son Gianluca’s time playing for Pep Guardiola at Bayern Munich.

Eintracht Frankfurt loaned you out to Manchester City. What where the biggest differences to the Bundesliga? The classic kick and rush comes to mind …

Back in the days it was really extreme. Sometimes it felt like a tennis match. When I was in front of the goal, the ball was at the back. When I went back, the ball flew over my head. It was 90 minutes of pure fighting. The goals often came after the 75th minute, when the players were totally exhausted.

I had a couple of discussions with the manager, about how I could be integrated. I was simply used to a different kind of football. We changed our training and style a bit. At the end of the day we managed to avoid relegation. And the team, the crowd and myself enjoyed playing a bit more football and a little less tennis.

Did your new team-mates accept you from day one?

Yes, very quickly. I was absolutely enthusiastic about the way these players lived football. I never experienced this attitude anywhere else. On the one hand everything was far more relaxed than in Germany, for example when it came to nutrition, or flying to Spain during the season to play a golf tournament there. On the other hand they were so dedicated.

Some players were going out until 4am or did not sleep at all. But at the training ground they went full throttle and gave everything, which was more than the guys had to offer who went to sleep at 11pm. This attitude, plus the toughness of English football, made these six months a great experience.

Any anecdote about that time?

Once I was fouled and went down pretty hard. Suddenly my own team-mates grabbed my arms and pulled me up. They made it very clear that the free-kick was already given and that there was no need to provoke a booking for the other player. This kind of fair play, which was back then an integral part of the team, was a completely new experience for me.

What are the differences between Bundesliga and the Premier League today? Can the Bundesliga learn from England? Or the other way round?

Quite rightly the Bundesliga is seen as a very strong league. But apart from Bayern and Dortmund, with the latter closing the gap slowly in recent years, the German teams are not yet as good on an international level as the Premier League clubs.

One reason is the enormous amount of money that English teams can spend, from position 1 to 20. This money also attracts more world-class managers. Even somebody like Pep Guardiola is struggling with his style of play when there are five or six teams fighting for the title.

Has he already failed in Manchester? Is the hype too big? Is he probably just average?

No, I wouldn’t say he failed. It’s just been a few months that he’s been working there. He needs time to build his structures. But as I said, in England there are way more clubs with great potential.

In Germany it was relatively easy for Guardiola to build structures that produced a team which was able to dominate the league in an almost scary way. England is different, even at a great club with a lot of money. There are simply so many other teams with huge financial resources and great managers like Conte, Wenger, Klopp, Pochettino and Mourinho.

Guardiola was the one who gave your son his first chance in the senior squad. Is he a manager who knows how to handle young players?

At least in Munich it looked like that. Unfortunately he did not complete what he started. At the end of the day it’s the success you’re judged on. That’s very similar in England, otherwise he would not be criticised there.

At Bayern he certainly saw Gianluca’s talent and supported him. As a matter of fact it takes two to make such a story a success, and my son stagnated a bit. He could not fully take his chance and deliver as expected by the manager. But I still believe Pep is a great admirer of young prospects. He gave Gianluca a chance at Bayern, Leroy Sane at Manchester City or Sergio Busquets at Barcelona, who he made a world-class player.

You joined Manchester City at the same time as Uwe Rosler. How would you judge his management career? He struggled at Leeds and is at Fleetwood now.

I follow Uwe’s career very vaguely. Back then he was a great guy, we had lots of fun. I’m happy for him that he slowly earns himself some reputation as a manager in England. I wish him all the best, hopefully he can make it step by step to the top.

There is a video out there on the internet which shows how you’re tackled by Boris Johnson. How did you experience this incident and how did he react?

He apologised (laughs). I think you can see on the video that he did not have the intention to tackle me that badly. He shook his head right afterwards and apologised, but it really hurt because he was tumbling and then hit me like a rugby player. But at the end of the day it wasn’t that serious and I played on. Today it’s quite funny as people ask me about it from time to time. And Boris Johnson is of course far from being a stranger! (laughs)