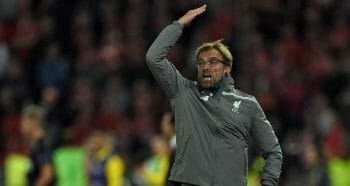 According to reports, Philippe Coutinho is the latest gem the Reds’ richer rivals are looking to pry out of Anfield, with Paris Saint-Germain allegedly preparing a £46m bid for the acorn-headed Brazilian.

Coutinho quickly established himself as a terrace favourite on the red half of Merseyside following his £8.5m switch from Inter Milan in 2013 but, after Liverpool missed out on Champions League qualification, they’re certainly vulnerable to losing him.

While selling integral squad members isn’t conducive to building the trophy-winning team Jurgen Klopp and co are hoping to construct, relinquishing their chief playmaker may not be as crazy a scheme as it seems.

In 43 games across all competitions last term, the 23-year-old scored 12 and created a further seven, a return that equates to Coutinho being directly involved with a goal once every 0.44 outings.

It’s a respectable statistic, but it doesn’t suggest Liverpool would crumble were they relieved of his contribution.

Contrast this to compatriot Roberto Firmino, who bagged ten and assisted seven in the same number of starts, while combating the side effects several have been unable to overcome during their freshman campaign in the Premier League.

It stands to reason Firmino is only going to improve on this impressive season next term and, with the wealth of frontmen available to Klopp, the former Hoffenheim ace could conceivably fill any void vacated by his international colleague.

The rumoured £46m that would line the attache case Liverpool would receive in exchange for Coutinho could go a long way to repairing a dodgy defence that specialised in allowing leads to slip in 2015/16.

In total, the Reds contrived to squander 19 points across their top-tier campaign after going in front. Had they held on to each advantage, they’d have finished second, just two back from champions Leicester City.

Steeling their porous rearguard is essential if they are to qualify for the Champions League once the music restarts, a feat you, dear reader, can back them to achieve at 8/5.