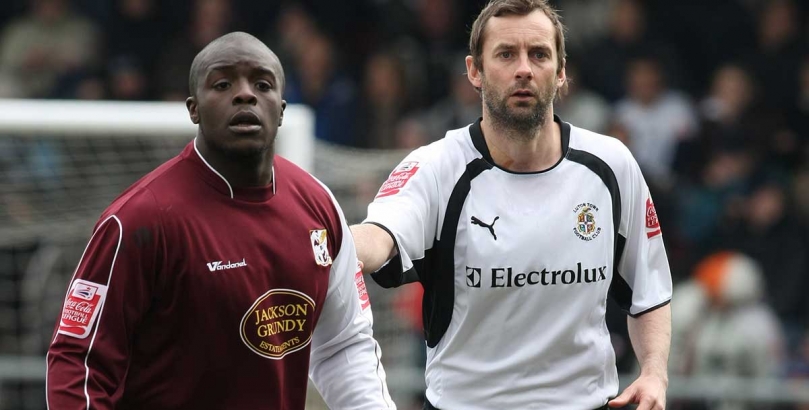 A hard-tackling midfielder with an eye for goal, Hutchison’s 19-year professional career took him up and down the ladder of English football, from Hartlepool United to Liverpool, Sheffield United to Everton and Millwall to Coventry City. However, despite this impressive CV, that also includes spells at West Ham United, Sunderland and Luton Town, the north-east native is perhaps best remembered for scoring Scotland’s winning goal at Wembley in a Euro 2000 play-off against England. Ultimately, the Scots failed to reach that particular tournament, but they’ll be at the 2018 World Cup if they stick with Gordon Strachan. That’s one of many opinions Hutchison shares in his exclusive interview with news.bwin…

I think Jurgen Klopp is building something special at Liverpool.

He might need a few more transfer windows to win the league, but the most important thing is that he’s a building an identity and something the fans can get behind.

He calls it ‘heavy metal football’, but the most important element is that he’s got the team scoring goals and good goals too.

Fitness is crucial too, I’ve never seen Adam Lallana in better shape and his performances have improved as a result.

The only concern I would have as a Liverpool fan is that they are still a bit leaky. They went so close when Brendan Rodgers was the manager and ultimately it was a lack of clean sheets that cost them the league.

Liverpool are 5/1 to win the title this time around.

It’s frustrating to watch Sturridge because you know how much ability he has and I think this explains some of the comments from Klopp.

When I was at Liverpool, I felt that Graeme Souness was constantly on my case, giving me a hard time and eventually I plucked up the courage to go see him.

He made it clear straight away that I should only be worried when he’s not on my case, because it means he didn’t care about me. He told me ‘I am on your case because I think you’re a good player.’

Obviously we’re not similar players, but it’s a good comparison to draw because it shows why he gets a bit of a hard time every now and again.

If he showed the same sort of endeavour as Sadio Mane, Divock Origi and Lallana, he’d be considered an absolute great – but I just worry he’s too laid back.

He’s a super talent but maybe the Premier League isn’t the best fit for him. His laid back style could be more suited to La Liga or another continental division that doesn’t have the same intensity.

The main thing for me is the new signings.

Last year Slaven Bilic saw all of his signings hit the ground running and adapt straight away, which in itself is rare. This summer, West Ham thought they were going to be in the Europa League and so they’ve signed 13 new players to create a squad designed to compete on all fronts.

Unfortunately, they’ve gone out early to Astra Giurgiu and now they are left with players who are not up to Premier League standard.

Andre Ayew I think is up to the level, but the likes of Gokhan Tore and Arthur Masuaku are nowhere near Premier League and West Ham standards. Going out of Europe so early leaves West Ham with a big squad, but not one necessarily equipped to perform week-in, week-out in the Premier League.

…on the Irons’ move to the London Stadium:

I’ve been to the new stadium and when you’re in the bowels of it, I’ve never seen a stadium that looks as good. It’s better than Wembley. It’s better than the Emirates. It’s plush, it’s slick, it really is a sensational stadium.

I don’t buy into the theory that the new stadium has had a negative effect on the players – they need to roll up their sleeves and get on with it.

The bit I do agree with is that it is not Upton Park, so while West Ham players should look forward to playing in such a great arena – so too do the opposition. You’d look at this ground and think it’s a good one to play football on, we can get the ball down and play.

Overall though, West Ham fans need to let Upton Park go. I’m getting a bit bored of this mentality that the ground is to blame for the drop in standards this season.

It was an unbelievable place to play, but I’ve played when the chicken run has turned against us (West Ham) too, so it all evens out. The bottom line is that the players need to play better.

Ronald Koeman to Everton was 100% the signing of the summer.

I had lots of Arsenal fans tweeting me last season when Arsene Wenger’s position was looking hairy and I was convinced Koeman was the best manager for the job, so for Everton to get him was a massive coup.

He has so much ability and he’s only going to grow under Koeman. I felt he was mismanaged last season and Martinez was too offensive and that exposed him.

He’s got a great manager in Koeman, but he’s not a soft manager. He can be harsh and won’t mince his words and we’ve seen that already when he took Barkley off at half-time against Sunderland and gave him a real talking to, which I don’t think is a bad thing.

In terms of his long-term development, I worry about Barkley’s size. If you look at all the great number 10s around the world, the likes of David Silva, Philippe Coutinho and Dimitri Payet, all have a low centre of gravity, they turn on a sixpence and I think that’s a big ask for a lad who is tall and muscular like Ross is. I think his future lies a little bit deeper at Everton, he could play as a deep-lying playmaker and do more.

Gordon Strachan is the man to take Scotland to the World Cup.

I know him really well and he is the most honest manager I’ve ever dealt with. I almost signed for him with Coventry City, before I signed in 2005, and there was no lie in him. He told me what to expect for the season, how much I could earn and that if a big club came calling, he’d let me go.

The honesty was so refreshing and that is clearly a great asset, as players want to play for him at international level.

He knows the players, he knows the game, but we’ve also got some talent to play with. Oliver Burke looks a serious prospect and is performing well in Germany and the Scottish media trust Gordon. Everything is moving in the right direction and I think he’ll get us qualified.

…on nearly signing for Rangers:

I very nearly signed for Rangers after I left Sunderland. I was so close to going there, but I just felt the draw of going back to West Ham and the Premier League – where I had a bit of unfinished business – so I moved back to London.

Dick Advocaat was in charge and Champions League football was on offer, so I do regret not going. Although he was more into his cricket, my dad was a Rangers fan, so I think he would have enjoyed it too.

They’re a great club and it’s great for Scottish football that they’re back in the Premiership.

I like to keep an eye on all of my old teams and Hartlepool are no different. I might not know what formation they are playing every weekend, but I’ll always keep an eye on the table.

I’ve seen Craig Hignett is doing well there and he’s a great lad. I’ve played a few veterans matches with him and he’s genuinely one of the funniest men I’ve ever spent time with, a truly fantastic storyteller. I think that charisma well suit him well, he’s got a bit of Klopp about him in that respect.

You see the likes of Rodgers and Roberto Martinez give very sterile interviews even after they’ve taken a hiding and it’s rubbish.

Klopp on the other hand, you can see the passion is still blazing even after the game is finished and he’ll call it as it is. That’s a skill I think Craig can use at Hartlepool, he won’t pull the wool over the fans’ eyes and that’s good, old-school management.

1 Your selection
2 Start Playing
Register, deposit £10 or more and place a Sport bet (3+ selections) up to £20, each with odds of 1/2 (1.5) or greater.
3 Get your FreeBet
If it’s not a winning bet, you’ll get up to £20 back as a FreeBet. T&Cs apply
Bet now! Log in
X
Allardyce joins former Celtic star in international management’s 100% club
Unlucky Liverpool loss shoves Man Utd legend closer to Swansea job
Author