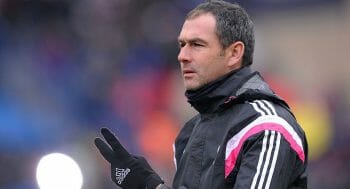 Swansea haven’t lost any of their last three meetings with Chelsea and we’re taking 16/5 they again avoid defeat when visiting the Premier League leaders at Stamford Bridge on Saturday.

The Blues have won 11 straight at home, so it’s obviously a speculative wager, but Paul Clement has worked wonders since taking charge of the visitors and they went agonisingly close to picking up a point at Manchester City on their last away day.

Trueform tips: We’ve enjoyed great success following Swansea in recent weeks and it’s hard to resist going to the well one more time at such generous odds. The Welsh outfit were a double-digit price when winning at Liverpool and our chart suggests they have been underestimated again for the clash with Chelsea.

Chelsea were ultra-impressive in their last home match, when beating Arsenal 3-1, but there have been signs that they are feeling the strain of being title favourites in some of their performances of late.

Liverpool had a real go at Antonio Conte’s side in a 1-1 draw at Anfield, they also had to settle for a share of the spoils when visiting Burnley and even Wolves had their moments before eventually succumbing to a 2-0 defeat in the FA Cup.

However, one definite plus point for the Blues has been the form of lively Spanish winger Pedro, who has netted seven times in his last 10 appearances. He will be a big threat again here and we like 50/1 for the former Barcelona player to open the scoring and the end result to finish 1-1.

A fantastic run of four wins in six Premier League fixtures has helped Swansea climb out of the relegation zone and it was no longer regarded as a surprise result when they saw off Leicester 2-0 at Liberty Stadium.

Clement knows all about Stamford Bridge after two stints on the coaching staff there and he said: “We went to Liverpool with a very positive attitude and also Manchester City, where we were very close to getting something as well. We will approach this with the same mentality.”

Chelsea have only conceded seven times in 12 Premier League home matches this term, but Stoke, Peterborough and Arsenal have all netted here in the last five fixtures and Swansea are currently averaging two a game, so 13/10 for both teams to score on Saturday does catch the eye, especially as it was 2-2 here last season and at the Liberty Stadium in September.