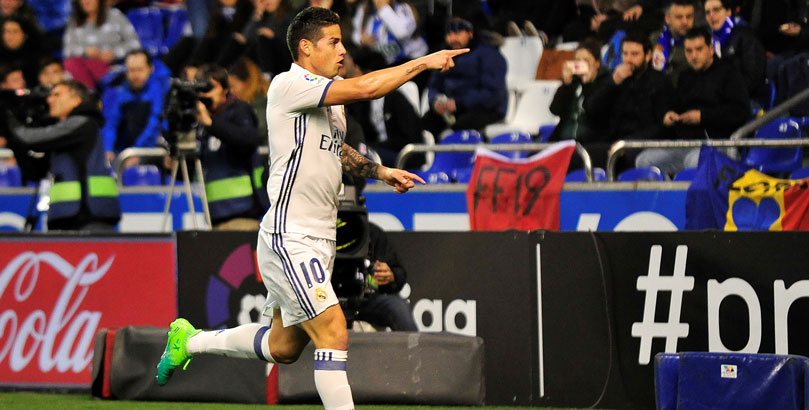 Real Madrid have found Valencia difficult opponents in recent seasons, winning just one of their last six LaLiga meetings and losing 2-1 at the Mestalla in February.

However, the Whites can’t afford another slip-up this Saturday as they battle it out with Barcelona for the Spanish title.

Next Tuesday’s Champions League clash with Atletico could be a distraction but we’re still taking 29/10 for the hosts to win 2-1, 3-1 or 4-1 in our Real Madrid vs Valencia betting tips.

Despite being without Cristiano Ronaldo, Gareth Bale and Karim Benzema, Real Madrid recovered from their Clasico setback to enjoy a 6-2 romp at Deportivo La Coruna on Wednesday.

Alvaro Morata and James Rodriguez pressed their claims for more playing time with early strikes and Isco capped off an outstanding individual display full of creativity by getting on the scoresheet.

“Many of the players who featured aren’t our regular starters and what they’ve gone out and done, in terms of the tempo and discipline, was amazing,” beamed Zinedine Zidane.

Isco also bagged a brace in a 3-2 win at Sporting Gijon earlier this month and is 11/2 to claim the last goal in this game.

Valencia looked capable of finishing a disappointing campaign strongly when claiming a hat-trick of victories at the start of the month.

However, they have since lost that momentum with a goalless draw against Sevilla and then back-to-back losses to Malaga and Real Sociedad.

Pepe Mel’s side trailed 3-0 at home on Wednesday night until former Manchester United winger Nani pulled one back from the penalty spot and then on-loan Italy international Simone Zaza set up a tense finish.

How much is left in the tank for this game remains to be seen, though, and we’re going for Ronaldo to score first in a 4-1 home win at 20/1.

Sunderland vs Bournemouth: Cherries to build on big win
Espanyol vs Barcelona: Leaders could be given derby test
Author