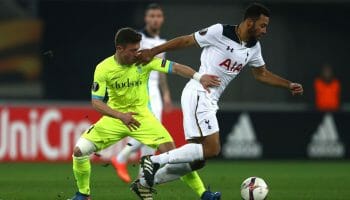 Tottenham must overturn a 1-0 first-leg deficit when entertaining Gent in the Europa League at Wembley but the London club are still firm favourites at 9/20 to qualify for the next round.

The 1972 and 1984 winners of this competition have never lost at ‘home’ against Belgian opponents, prevailing in three of four previous fixtures, and will have been boosted by Sunday’s smooth FA Cup success at Fulham.

Harry Kane was unlucky to hit the woodwork in last week’s clash with Gent but gained compensation with a fine hat-trick in Tottenham’s 3-0 victory at Craven Cottage, which left Mauricio Pochettino feeling far happier than after the defeat in Belgium and a previous 2-0 loss at Liverpool.

“After Gent, we had a few meetings and the reaction was fantastic,” said the manager. “I am very pleased. Now we’ll try and keep that feeling for Thursday. It was a great opportunity to show that we are alive and end that bad feeling after two defeats – to change and prepare for the Europa League. Thursday is a massive, massive game for us.”

Spurs really should be too strong for Gent if on top form and keeping a clean sheet would clear the way for them to turn around this tie, so we’re backing the hosts to be clinical and like 91/100 they win to nil at Wembley.

A Look At Gent’s Betting Odds

Gent will take some heart from the way Tottenham struggled at this venue in their Champions League group, when losing to Monaco and Bayer Leverkusen, but it has to be said that the visitors aren’t in the same class as those teams.

Hein Vanhaezebrouck’s side was thrashed 5-0 when taking on Shakhtar Donetsk in western Ukraine during the Europa League pool stage and it will be disappointing if Spurs can’t also expose the limitations of an outfit currently down in eighth in the Jupiler League.

The feeling is that Gent will also be overawed by playing at the national stadium, with Vanhaezebrouck commenting after the home leg: “Going to Wembley is mythical. The most important thing for us was to make it a game, to avoid losing 4-0.” Hardly the words of a confident coach and we’re going for correct scores of 2-0 at 5/1 and 3-0 at 27/4 in Tottenham’s favour.