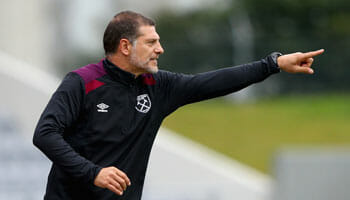 West Ham have had a tough start to the season but received a favourable EFL Cup draw when they were paired with League Two strugglers Cheltenham.

The Hammers are bottom of the early Premier League table after defeats at Manchester United and Southampton and will be keen to avoid an upset at Whaddon Road, which would set the alarm bells ringing.

Regardless of team selection, the visitors should be too strong for the Robins and we kick off our Cheltenham vs West Ham betting predictions with West Ham to win both halves at odds of 21/10.

A Look At Cheltenham’s Betting Odds

Cheltenham slumped to a 3-0 defeat at Carlisle on Saturday when two goals inside the first 18 minutes left them with a mountain to climb.

Gary Johnson’s men came from 3-1 down to edge past Oxford 4-3 after extra time in the previous round and their only clean sheet so far came in a 1-0 win against rock-bottom Crawley.

Keeping the Hammers at bay looks a tall order here, especially given that they were beaten 2-1 by Swansea Under 21s in the Football League Trophy.

Johnson warned: “We are up against Premier League opposition so there has got to be a real work-rate. If you let teams like West Ham run all over you and around you then you are in for a long night. We need some real team energy.”

West Ham are likely to dominate possession and maintaining the energy levels needed for the full 90 minutes will be tough for Cheltenham, who only had six substitutes on the bench at the weekend. We like 5/4 for West Ham to score between 75 minutes and full time.

West Ham have had European football to contend with for the last two seasons but a cup run looks more realistic this term with no such distractions.

Slaven Bilic will want to inject some momentum into the season after seeing his side concede seven goals in their opening two Premier League matches and this looks the perfect opportunity for West Ham’s fringe players to push their claims for a first-team place.

This should be a comfortable win for the top-flight team and we fancy West Ham to overcome a two-goal deficit on the handicap at 13/5.