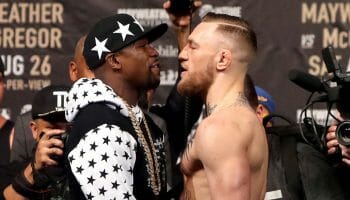 This weekend’s match-up between Floyd Mayweather – in many people’s eyes the best pound-for-pound boxer in history – and UFC star Conor McGregor has stirred up plenty of opinions from fans on both sides.

The debate over whether the coming together of the two sports is fascinating or a farce will surely rage right up to – and beyond – their meeting in the early hours of Sunday morning. To ensure there is plenty of material for discussion, we’ve compared the most relevant data from their respective careers to produce the Mayweather vs McGregor tale of the tape.

First of all let’s look at the fundamentals: McGregor is slightly taller and far younger – 12 years Mayweather’s junior – which surely counts for something. While he lacks his rival’s impressive unbeaten record, his far higher knockout percentage demonstrates that he clearly knows how to immobilise an opponent.

Comparing McGregor’s 10 UFC fights with Mayweather’s 10 most recent outings reveals some interesting similarities in addition to the differences which would be expected. Both fighters connect with a similar percentage of their attacks and land a near-identical number per minute at 5.8 each. Defensively they are chalk and cheese though: only 20% of punches thrown at Mayweather have found their target compared to 43% of strikes directed at McGregor.

While some of these numbers will be driven by the contrasting styles of combat, it highlights the different experiences that these two fighters will take with them into the ring.

Clash of the moneymakers

Both fighters are renowned for their boasting about the amount of money they earn for themselves and their respective sports, and it’s clear they have dominated the big events. The three most-watched pay-per-view boxing matches have all involved Mayweather, while four of the five most popular in UFC history have starred McGregor.

Will McGregor have the stamina?

Apart from the most obvious challenge facing McGregor – the fact that he will need to adapt to boxing’s rules while facing one of its all-time greats – there are some specific hurdles for him to overcome. One that stands out is stamina: with nine of Mayweather’s last 10 fights having lasted a full 12 rounds, he’s spending comfortably more than half an hour in the ring at a time, whereas his challenger’s fights are usually over in around eight minutes. If the UFC man can’t make an early breakthrough, he could well find himself worn down by one of boxing’s best ever defensive fighters.

In McGregor’s favour though, Mayweather has suggested his stamina is no longer what it once was. Speaking on Tuesday, the 40-year-old said: “I’m a lot older now, being older, the body needs a lot of rest. This training camp, I did a lot more resting, to allow the body to recuperate and rejuvenate. I said before this fight wouldn’t go the distance, if you want to bet, bet it won’t go.”

McGregor believes the 8oz gloves will help him claim an early win. The UFC champion said: “I don’t believe with the new gloves he makes it out of the second round. Part of me kind of wants to show some skill and dismantle him but I do not see him absorbing the blows. I am ready to go to war for 12 rounds and I am also ready to put him away in seconds. There is no way in hell I am not prepared to fight in the deepest of trenches.”
McGregor to win in Round 2 is 33/1 – BET HERE!

Does being a southpaw give McGregor an advantage?

In addition to the potential unfamiliarity of McGregor’s approach, there has been talk of his left-handedness unsettling Mayweather. Looking back over his professional career, the American seems to land punches equally comfortably against boxers of either stance, but southpaws have fared marginally better at lasting the distance and are therefore perhaps better suited to repelling his more devastating attacks.

McGregor has looked vulnerable to opponents with greater reach

While Mayweather is the slightly shorter of the two, his reach compares favourably to many of McGregor’s UFC opponents to date. This could be telling given that three of the four matches which have seen McGregor soak up the highest percentage of successful strikes have been against those with a reach greater than or equal to Mayweather’s. With the challenger unable to use kicks to maintain distance, he could struggle to stay out of range.

What do other boxers think?

“It’s probably (going to be) a landslide. Look at the great fighters Mayweather’s fought, and he’s made them look average. Some of the fighters Mayweather’s fought would probably beat Conor McGregor as well; Conor can’t really compete. He’s coming out of his field and going into Mayweather’s domain. Even though he’s an excellent fighter in UFC, he’s not an excellent boxer. Him crossing over is going to be a real, big challenge. He could give a good account of himself; I think Mayweather will win but as long as he gives a good account of himself, it’ll work really well for him.”

“This really is going to be his (Mayweather’s) last fight, he wants to go out with a bang. Who wouldn’t? I don’t think he’d want to end his career on another points victory. So if he sees an opportunity, if he gets a chance, he’s going to go for it and try and take Conor out. All I can go on is what I think Floyd’s going to do: be aggressive, look for openings, look to take Conor out fairly early. If I had to put money on it I’d say he’s going for the stoppage. He’s extremely accurate, extremely good defensively. If he catches Conor, he could be in some trouble.”