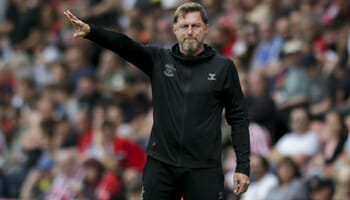 Southampton have impressed us far more than Newcastle early on this season but do not have a great head-to-head record versus the Magpies.

Saints have only come out on top once in their last eight Premier League meetings, suffering four straight defeats at St James’ Park.

After assessing both of the above-mentioned angles, we’re going with 5/2 for a draw as our first Newcastle vs Southampton prediction.

Newcastle led twice in their league opener against West Ham at this venue but eventually went down 4-2.

United were then beaten 2-0 at Aston Villa and lost out on penalties to Burnley in the EFL Cup following Wednesday’s goalless stalemate here.

That slow start means this is already a huge game for Steve Bruce and his players, as discontent at the club’s lack of transfer activity mounts by the day.

Bruce said: “We haven’t done a lot wrong, even though we haven’t won yet. OK, we’ve gone out of the cup but we didn’t lose on the night.

“We’ve seen a few positives. I thought we played some good stuff at times but we didn’t get the rub of the green that you need.”

Bruce does have a habit of pulling out decent results when really needed and a stalemate here would help to steady the ship.

A positive approach from the hosts would make Newcastle vs Southampton odds.

Magpies winger Allan Saint-Maximin (foot) should be fit, defender Paul Dummett is training after a calf problem and midfielder Isaac Hayden could return from a knee injury.

Goalkeepers Martin Dubravka (foot) and Karl Darlow (Covid-19) are out and Jonjo Shelvey is working his way back from a calf strain.

Southampton followed up a 3-1 away loss at Everton with a very encouraging 1-1 draw versus Manchester United at St Mary’s.

Saints led against the run of play at half-time after a Che Adams shot deflected in off Fred but Mason Greenwood levelled in the second period.

The Red Devils then looked poised to kick on and claim victory but Southampton rallied bravely and even had chances to win it late on.

Ralph Hasenhuttl will also have been delighted with an 8-0 EFL Cup romp at Newport in midweek, their biggest victory since World War I.

“It was a serious performance from the first minute, this is what you need against a lower-league club,” Hasenhuttl said. “A lot of teams have struggled here in the past.”

Saints do currently have a nice blend of proven performers and youthful prospects, which should stand them in good stead as the season progresses.

Adams is due a goal after netting nine times in the top flight last term, so 11/2 for the Scotland forward to break the deadlock is added to our Newcastle vs Southampton betting tips.

Saints midfielder Stuart Armstrong continues to battle a calf problem and is yet to return to first team training. Midfielder Will Smallbone remains out with long-term knee trouble, while the clash could come too soon for new recruit Lyanco.