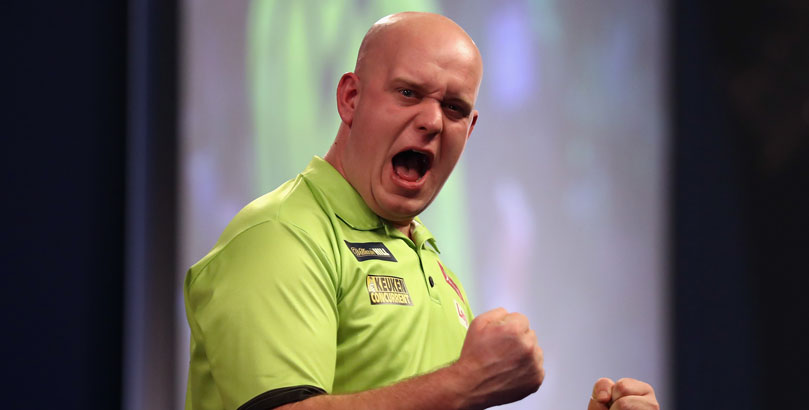 Michael van Gerwen was crowned the bwin Grand Slam of Darts champion for the third successive year when he beat Peter Wright 16-12 in the final on Sunday night.

The 28-year-old Dutchman has not been beaten since his shock defeat to John Henderson at the World Grand Prix last month. Next up is the Players Championship Finals at Minehead before the World Championship begins on December 14.

bwin caught up with the world number one to discuss ‘dartitis’ as well as his rivalry with Phil ‘The Power’ Taylor, who is due to retire after the Alexandra Palace tournament.

Fellow Dutchman Berry van Peer struggled with dartitis during the bwin Grand Slam of Darts last week. What are your thoughts on that?

“I don’t know how it is to have dartitis but I have seen it before, most of the time it is with the weaker players. I have never seen a really top performing player get dartitis. Maybe they have to work on the mental aspect a bit more than the practising. Maybe that will help him.”

There are quite a few up-and-coming players bursting onto the scene. Are there any in particular to watch out for?

Do you have your eyes on breaking some of Phil Taylor’s records?

“I think that’s nearly impossible. Times are so different. He was there for 20-odd years. You can’t compare me with him – it was different years, different level, different players.”

How important is it to have characters like yourself and Peter Wright in the sport to give something to the fans?

“That’s for the fans to decide! I just want to make sure I do my thing and to play as good as possible. The only thing I can do is to make sure I keep practising and playing really good darts.”

1 Your selection
2 £10 back-up bet!
Min. deposit £10. If your bet loses we’ll give you an extra £10 free bet!
3 Sign up now!
Registration only takes 2 minutes, so register and place your bet now! T&Cs apply
Bet now! Log in
X
Atletico Madrid vs Roma: Struggling hosts are worth taking on
Anderlecht vs Bayern Munich: Hosts can end Euro scoring drought
Author