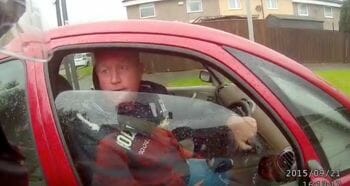 Such is the impression that Mr Pickering, 54, of Hull, has made on the viewing public that bwin have entered him into their betting ahead of the next series of I’m A Celebrity Get Me Out Of Here, due to air in November 2015.

Pickering is currently 8/1 to enter the jungle, while punters can avail themselves of 50/1 about the former window company owner and would-be bare-knuckle boxer being declared the show’s winner by way of a public vote.

At the time of writing, the video of his confrontation with Midz (uploaded in four parts) had accumulated just shy of 115,000 hits on Youtube.

Parodies have followed in their dozens, with a selection of five of the best even appearing at the end of last night’s edition of Newsnight.

Given such a level of interest, Pickering, who later described himself as “an easy-going guy who does not go around bothering people” in an interview with the Hull Daily Mail, certainly commands sufficient celebrity to feature in the ITV spectacle.