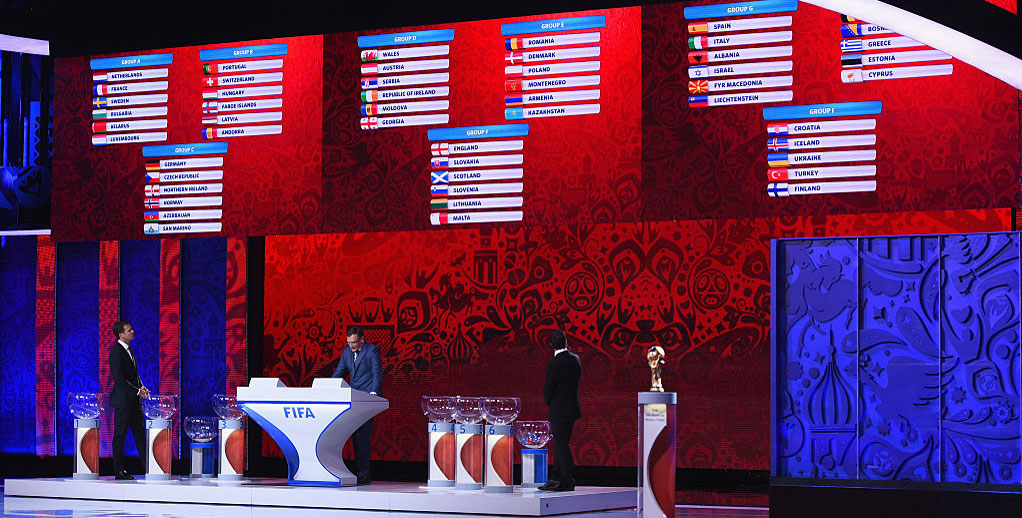 The World Cup draw takes place on Friday and fans of all participating countries are keen to know which of the various combinations possible will give their side the most straightforward passage to the knockout stages.

England’s supporters are no exception so to make things easier to fathom during Friday’s event, we have crunched the numbers on three different ways of identifying the safest – and trickiest – groups that Gareth Southgate’s side could be handed at Russia 2018.

World Cup draw based on the FIFA rankings

The obvious place to start is by grading teams using the official FIFA rankings. We’ll use the actual ranking points rather than just each team’s current world ranking, as the latter would obscure how the points are currently distributed.

Starting in Pot 1, 5/1 tournament favourites Germany are the obvious team to fear, as they top the world rankings and have seen their points tally increase by 12% since this time last year. At the other end of the scale, Russia may be boosted by being the host nation but they have far fewer ranking points than any other Pot 1 team.

In Pot 3, Denmark and Sweden are the strongest-looking teams despite needing play-offs to qualify for the tournament, while Iran and Egypt have accrued the lowest scores. Serbia are the team to avoid in Pot 4, narrowly edging out Australia and Morocco, while Saudi Arabia and South Korea appear to offer the smallest threat.

There is an added complication to the World Cup draw though, which is that a group cannot contain more than two European teams or more than one team from any other confederation. Therefore while the best possible draw for England is simply the lowest-ranked team in every pot – Russia, Egypt and Saudi Arabia – there is a twist in the worst-case scenario.

The combination of opponents with the highest combined total of FIFA ranking points is actually Brazil, Denmark and Australia, as being drawn with Germany would mean that England could not then face any of the three toughest teams in Pot 3.

A lot of the movement in the FIFA rankings will be driven by qualifying games and friendlies, so we also wanted to isolate each nation’s likely performance in the finals of a major tournament. To do this, we identified every player who featured in the qualifying campaign and added up every start they have made at a major tournament in the last decade – namely the World Cup, Confederations Cup and each continent’s main championship. Russia obviously did not have to qualify so we used their 2017 friendlies to get their list of players.

Unsurprisingly Pot 1 has plenty of collective tournament experience, but it is Argentina who lead the way with 266 starts between the players who featured for them in qualifying. At the other end of the spectrum, the Poland squad have exactly 200 fewer and are therefore in danger of being overwhelmed by the occasion.

In Pot 3 the team to avoid is a Costa Rica side which made the quarter-finals of the last World Cup and has had plenty of joy in the CONCACAF Gold Cup along with a few guest appearances in the Copa America. Panama in Pot 4 may be featuring in their first ever World Cup draw but likewise have plenty of Gold Cup experience to draw upon.

The best World Cup draw for England would be the aforementioned Poland from Pot 1, plus Egypt and Saudi Arabia for a combined 173 major tournament starts this decade. The worst-case scenario would involve the experienced pairing of Argentina and Costa Rica, but instead of Panama – who would represent a second CONCACAF team in the same group – Japan would come in for a combined 680 starts arrayed.

Returning to something more traditional, we also pored over England’s past results to see which nations the Three Lions have historically performed well – and badly – against.

In Pot 1 the bogey team is clearly Brazil, who England average fewer than one point per game against, while they have taken over two points per game against a Belgium side which has only beaten England once in 21 attempts.

In Pot 3 the likes of Costa Rica and Iceland – both of whom have famously frustrated England at recent tournaments – are best avoided in favour of Egypt, against whom England have a 100% record. Surprisingly England have never beaten either of the two lowest-ranked nations in Pot 4 – South Korea and Saudi Arabia – although a combined three draws out of three isn’t too depressing, but to err on the side of caution the unbeaten record against Japan bodes well.

The best World Cup draw on this basis would be Belgium, Egypt and Japan, against whom England have taken an average of 2.57 points per game, while the least desirable combination would be Brazil, Costa Rica and either of South Korea or Saudi Arabia. England’s average against these three is slightly south of a point per match, so if historical results have any influence on preparations then it is a distraction they can do without.