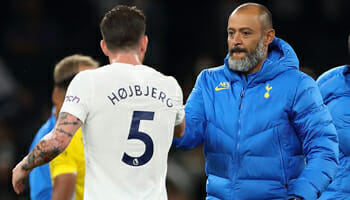 Under-fire Tottenham will be looking to take their Premier League frustrations out on Slovenian minnows Mura in the Europa Conference League.

Nuno Espirito Santo desperately needs a boost and it will be a major surprise if Spurs do not cruise to a Group G victory in London.

We’re going with 21/20 for the hosts to prevail by more than two clear goals for our first Tottenham vs Mura prediction.

Nuno enjoyed a brief honeymoon period at the start of his reign but is now under pressure to improve results.

Captain Hugo Lloris commented: “In terms of performance, we need to step up as a team and we need to increase our performances – it’s individual and obviously collective.”

Spurs did at least register a solid 2-2 draw away to Rennes on Matchday 1 in this competition and remain outright favourites to lift the trophy.

Harry Kane featured in a strong line-up, having earlier hit a double in a qualifying win over Pacos Ferreira.

With the England striker yet to get off the mark in the Premier League, he could turn out again in a bid to boost his confidence.

Nuno certainly dare not risk putting out a weakened side and a commanding victory is surely on the cards.

Mura are mid-table in Slovenia’s top flight after following up a decent win away to Maribor with back-to-back draws versus Tabor Sezana and Koper.

However, they have had their limitations exposed on several occasions when stepping up to compete in Europe.

The Black and Whites were thrashed 5-1 by PSV in a Europa League qualifier last season.

This term, Mura went down by the same score on aggregate over two legs against Sturm Graz in that competition.

Ludogorets of Bulgaria beat them in a Champions League play-off and Lithuanian outfit Zalgiris were only edged out 1-0.

Even a drop down to this new European level is unlikely to be enough and Mura lost 2-0 to Vitesse Arnhem at home on Matchday 1.

Head coach Ante Simundza admitted: “We are learning and will still be learning for a long time to come.”

Let’s finish off our Tottenham vs Mura betting tips by taking 15/4 for Spurs to lead 2-0 at half-time.