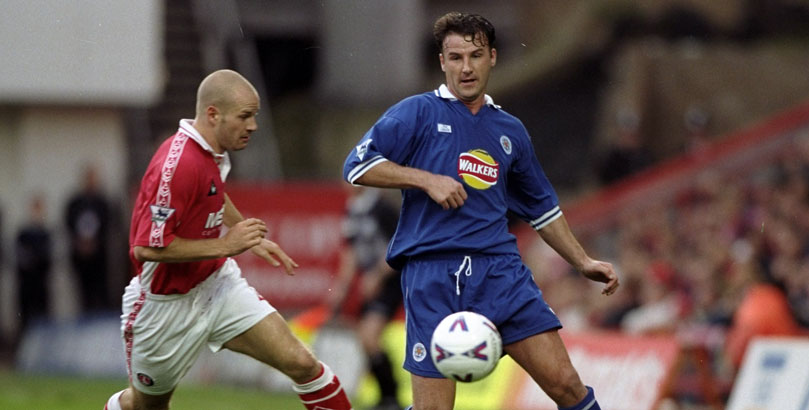 Former captain Steve Walsh is seen as a Leicester City legend due to the success he enjoyed during a long career with the Foxes. In an exclusive interview, he gives us his thoughts on how the team is doing under Craig Shakespeare, his hopes for Harry Maguire, Demarai Gray and Adrien Silva, plus the promotion prospects for his first club Wigan Athletic.

On Harry McGuire and the potential of a back three…

“I think he’s had an immediate impact with fans and the team. He’s an old-style centre-half with a lot of skill and rightly deserves his call-up to the national set-up. Gareth (Southgate) has obviously been watching him a fair amount this season and likes what he sees.

“You wonder if potentially Craig Shakepeare is looking at a back three to incorporate McGuire alongside Huth and Morgan. Myself, Matt Elliott and Gerry Taggatt played a back three back then and it was like a brick wall. I don’t think it’s a system that we could play at the moment, especially at home because we need some wins – we’ve created a lot of pressure on ourselves to get some points back.  We also don’t quite have the attacking wing-backs to fit the system. Ben Chilwell could do that role but I don’t know if Danny Simpson could do that.

“We are very organised at 4-4-1-1 and won the league with that system so I wouldn’t meddle. It’s been a difficult start but we’ve had enough chances in recent games to not be in this situation, such as Bournemouth and Huddersfield.”

On the pressure on Craig Shakespeare…

“He needs to keep the players on board and believing in his system. We’ve got a wonderful set of owners and I can’t see Craig losing his job. I think they’ve made the right decisions over the past four or five years so I hope they stick by the manager and let him get us out of this position. Shakey knows the position he’s in and knows that it comes with the territory if you’re not winning games. Let’s give him a few months and see where we are at around Christmas.

“I think Craig knows when to change and how to change. It’s an interesting period for him. I think tactically he knows his best team but we’ve lost a fair amount of presence in the midfield with Kante and Drinkwater leaving so we’ve lacked the creativity in the midfield to help Jamie Vardy up top. If there’s anyone who can do the job it’s Craig – a few wins will improve the situation. He’s a great man manager and motivator.

“I’m a massive believer in clubs that ride the storm and sit tight with managers. Some hit the panic button too soon, like Crystal Palace, and cost themselves a lot of money. It was farcical. I can’t see them pulling it around and think they’ll go down as a result. We’ve seen how the signs point downwards sometimes and then action is required, but sometimes it’s a case of sticking it out. Under Ranieri, it was only going downwards as he lost the dressing room. It was the correct decision to sack him.”

Where will Leicester City finish in the Premier League? BET HERE!

On the form of Riyad Mahrez and his struggles this season…

“Craig is not afraid of dropping Riyad, he did it on the weekend. Riyad made it clear he wanted to leave the club and that’s the time to go. He’s in a strange position as not a lot of clubs were in for him. He needs to up his performances and get himself right, partly because his mind might be elsewhere, but he’s probably a bit disillusioned. He’s a key player for the creativity of team and we’re missing that spark at the moment. There will be talks of him leaving in January but we’ll have Adrien Silva come in and hopefully provide that for us.”

On the future of Demarai Gray…

“Demarai Gray is a star of the future. When he gets a chance, he has to take it. He’s a young lad and it’s important to rest him at the right times. He’s got a lot of pressure on his shoulders at the minute and if he can get on the scoresheet, then that confidence will start to come through.

“If you offer me the choice of keeping Demarai Gray or Riyad Mahrez, I’d keep Gray. He has the potential to play at a higher level. He’s got an incredible future ahead. Shakey won’t hold back someone unnecessarily, but he needs to add consistency to his game to start.”

On Adrien Silva and the transfer saga…

“The situation with Adrien Silva has become a ‘sideshow’, missing out by just 14 seconds, but there are rules and regulations in place and while it’s a situation you wouldn’t ideally want, the thing to remember is that in January Leicester will definitely have a very good player and he’ll be a brilliant addition to the squad and a great acquisition for the club.

If we want to challenge for Europe, he’s exactly the type of player we should be signing.”

On if Leicester City can once again target European competitions…

“I believe with these owners, that will happen. They won’t stop investing. We’ve tasted it and so have the owners and everyone wants that again. The dream of winning the Premier League again is most certainly muted but we’ve got a chance of getting back into European competitions.

“I think within the next five years, we’ll be challenging for a European prize, and I think Craig Shakespeare is the manager who can get us there.”

“I’m biased because I’ve won the cup a few times. I love the English competitions but I also understand where Mourinho and Guardiola are coming from. When you play Champions League games and schedules are so compact that you have to prioritise competitions, you have to reshuffle your squad for those games. In essence, it’s a cup that gets in the way. You have to give greater weight to more prestigious and higher rewarding competitions.

“For Leicester City, it represents a cup that we could get to the latter stages of. If there’s a chance to win the cup, you always have to go for it.  The memories I had of winning these types of competitions is the reason you play football.

“The biggest plus points for these competitions is that they give the younger lads looking to prove themselves a chance to show what they can do and show that they have a future at the club.”

“He’s a very clever manager. I worked under him for five years – he created the team spirit under Leicester City and put the club on the map. I’d love to see him managing a club again but I know he’s happy with the Irish national set-up. I have no idea how he’s managing to get results with that team and if Ireland qualify, then he’s done an amazing job. He still has a lot to offer at the top club level.”

On his time at Wigan Athletic…

“I have some very special memories at Wigan Athletic. I remember playing my first game for them at Maine Road in the Milk Cup and we lost 2-0. I loved the place and thank them for the springboard that took me to Leicester. It’s a rugby town and to play Premier League football was an amazing achievement. It’s a great club, with great fans.

“At the time I played, Paul Cook was a young scout and it’s great to see him as manager now. I’m still very good friends with Graham Barrow – he’s Mr Wigan Athletic.”

On their promotion prospects…

“They’ve got a fantastic chance of getting promoted. They had a big win at Peterborough and they’ve got every chance. With Paul Cook as manager, they’re playing the right football and attracting the right players – they are a Championship team so I have no doubt they’ll be promoted.”

“I always believe that ex-players staying inside football and managing clubs that they played for is always a good thing. They have a presence that lifts the club and Paul was well respected, a great player, and a great signing for the club.

“I didn’t see him as a manager, but I never did with Simon Grayson either. It’s bizarre that you think he could manage a team but these things happen. Paul is a great person to have around, he has a fantastic aura, and was technically a very good player.

“He was a right laugh in the dressing room, playing jokes on everyone and was the life and soul of the dressing room. He was a great guy, a great lad and motivated other players to play well.

“I don’t think it’s just the money aspect, you’ve got to create the right team and management squad to go alongside it. You need managers that are adaptable and change to modern football. Players are no longer built like me. It’s much more about finesse and quickness.”

“I think John Stones, Phil Jones and Michael Keane should be the three players in contention for starting roles in the England set-up at centre-back. Harry McGuire will be pushing for a run of games. Once they’ve secured qualification then I think Harry will get a run of games but I think if Gareth plays a back three, he’s got the right full-back system with Kyle Walker and Danny Rose bombing forward – I think that would work well but I’m not sure they’ll do that.

“I think several of our centre-backs are underperforming. I don’t know what it is but they don’t seem to understand the system, we look vulnerable at times. There’s a squad there to be reckoned with but we need to express ourselves a bit more rather than play scared.

“I think Gareth Southgate will sort the situation out by the time the World Cup comes but you’ve got five top-class centre-halves in that team so hopefully we’ll be defensively solid by next summer’s tournament.”