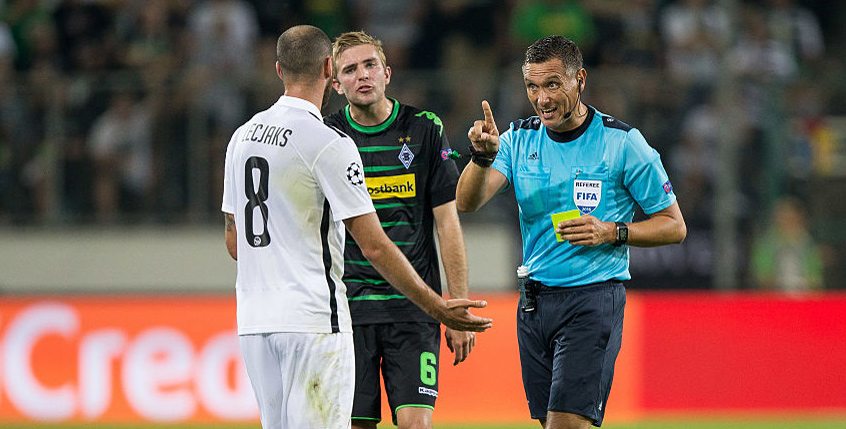 With Diego Costa still sulking in Brazil and looking unlikely to pull on a Chelsea shirt again, Premier League referees will be relieved to have one less troublemaker to police this season. There are still plenty of top-flight players who can be a handful for officials though, and just as many who have worked out how to stay on their good side and are the referees’ pets.

We’ve analysed the data from the last three seasons across Europe’s ‘big five’ leagues to reveal which players know how to bend the rules and which referees are most – and least – likely to let them get away with it.

Stoke have imported the streetwise Eric Choupo-Moting over the summer, who has managed to rack up an impressive 51.5 fouls for each card he has received in the last three seasons. Bournemouth’s Harry Arter looks hot-headed in comparison, having been carded once for every 2.8 fouls committed. After his moment of madness against Tottenham earlier this season, it’s no surprise to see Jonjo Shelvey also among the five players who can barely put a foot wrong without being punished.

Roger East is the referee who lets the most slide in Premier League matches, tolerating an average of 7.53 fouls for each card he brandishes, with Mike Jones and Lee Mason also reluctant to take names. In contrast Andre Marriner, Lee Probert and the misleadingly-named Kevin Friend are not men to be trifled with; all allow fewer than six fouls to pass on average before whipping out a card.

The Spanish top flight is a far stricter place than the Premier League, with an average of almost seven more fouls awarded per match and far more yellow cards; 5.16 per game compared to England’s 3.45.

Referee Ricardo de Burgos Bengoetxea – pictured above during a heated exchange with Luiz Suarez in the Spanish Super Cup earlier this season – is the division’s most tolerant but still takes a name once every 5.91 offences. Meanwhile, compatriot Ignacio Iglesias Villanueva is the strictest official in all of the big five leagues with just 4.28 fouls needed to provoke a card on average.

Bayern Munich’s Kingsley Coman may be one of their squad’s youngest members but he’s already learned how to stay on the right side of the referee, getting away with an average of 38 fouls for each time his name has gone into the book. His defensive colleague Rafinha, who is among the Bundesliga’s five most-punished players, could learn a thing or two from him.

The Brazilian right-back should practice the darker arts in front of Robert Hartmann – the softest touch in the big five leagues with an average of 9.38 fouls required to have him reaching for his pocket.

In Italy we find the most prolific fouler in the big five leagues over the last three seasons: Udinese’s Maxi Lopez. The veteran striker is not afraid to use his 6ft 3in frame to his advantage, having racked up a bruising average of 3.88 fouls per match in spells at Chievo and Torino, but is seldom punished. Anticipating a referee’s appetite for destruction does not always get easier with age though, as an even elder statesman – the 34-year-old Daniele De Rossi – is the division’s most heavily-punished player.

De Rossi would do well to steer clear of referee Paolo Valeri, the Italian top flight’s most card-happy official, and hope instead that he’s supervised frequently by the lenient Piero Giacomelli this term.

In France we find the craftiest fouler of all; Montpellier’s Souleymane Camara has committed a whopping 71 fouls in the last three seasons and been booked only once. Toulouse’s trio of Issa Diop, Steeve Yago and Yann Bodiger should all be taking notes when they face Camara this season, as all three are among the five most heavily-punished players in the division. In training they could take lessons from team-mate Andy Delort, who is also among the five least-penalised players in Ligue 1.

Toulouse fans can be forgiven for watching matches from between their fingers when they see Karim Abed lead the teams out at kick-off. France’s strictest referee has needed only a little over five fouls on average to start jotting down names in recent seasons.