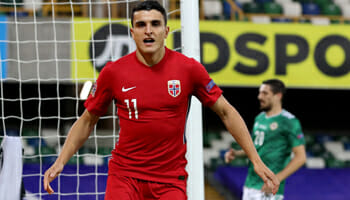 Norway thrashed Northern Ireland 5-1 in Belfast in the Nations League last month and are hard to oppose in the return fixture in Oslo.

The hosts are fighting it out with Austria at the top of Group B1 on six points, while their visitors are rock bottom with just one draw from three matches.

Everything suggests 6/5 for Lars Lagerback’s side to win by more than one clear goal should be our first Norway vs Northern Ireland prediction.

Norway bounced back from an extra-time loss to Serbia in the Euro 2020 play-offs by romping to a 4-0 triumph over Romania at this venue.

Borussia Dortmund striker Erling Haaland made it six goals in three Nations League appearances when hitting a hat-trick in that contest.

Haaland and Sorloth both hit doubles at Windsor Park last month after Elyounoussi’s early opener was cancelled out by Paddy McNair.

Following that game, Norway coach Lagerback waxed lyrical about Haaland, comparing him with Henrik Larsson and Zlatan Ibrahimovic, who he managed when in charge of Sweden.

“He’s a little bit of a combination,” beamed the 72-year-old boss. “He has the gift and the mentality. If we keep his feet on the ground, he can reach really high.”

Norway have developed a nice habit of producing fast starts when favourites for victory, netting early on versus Faroe Islands, Malta, Northern Ireland and Romania.

Northern Ireland began this international break with a memorable penalty shoot-out triumph away to Bosnia and Herzegovina in the Euro 2020 play-offs.

The energy used up on that emotional night may have played a part in the Green and White Army going down 1-0 at home to Austria in this competition on Sunday, though.

“We need to make decisions going into the Norway game on who we put in, who we rest, who we leave out to try to freshen it up again,” said Ian Baraclough. “For the lads that come in, it’s not easy.”

Michael Gregoritsch’s first-half header proved the difference, but in truth it could have been many more as Austria repeatedly carved open Northern Ireland in the first half.

Baraclough made five changes for that contest and will no doubt shuffle his pack again here, but the visitors are not blessed with great strength in depth.

He added: “Whoever comes in has to be aware, they’re not going to get a hard time from me if they lose possession in trying to do the right thing. We want players to go out with no fear to make a mistake.”

To be fair, the visitors have scored in seven straight away games, including when travelling to Holland and Germany.