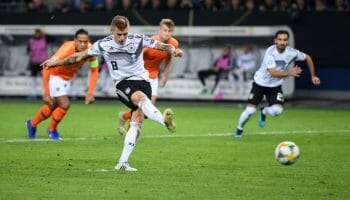 Germany have already qualified from Euro 2020 Group C but will still be keen to wrap up top spot when entertaining Northern Ireland in Frankfurt.

Die Mannschaft have claimed eight straight wins over the men in green, who are resigned to finishing third in this pool and entering the play-offs.

The visitors always play with pride and passion, but 18/25 for a home win to nil is hard to oppose for our initial Germany vs Northern Ireland prediction.

After flopping at last year’s World Cup and in the Nations League, Germany have redeemed their reputation during this qualifying campaign.

Saturday’s 4-0 triumph over Belarus made it six wins out of seven pool games and gave them a two-point lead at the summit.

Matthias Ginter and Leon Goretzka put them in control of that contest, before a brace from Toni Kroos wrapped up a routine victory.

At the other end, Manuel Neuer preserved his clean sheet by guessing correctly to produce a brilliant save from Igor Stasevich’s spot-kick.

He said: “We are a young group with little time left to play before the tournament. We must take every opportunity to take the next development step.

“We have to evolve, because we are far from where we want to go.”

Joachim Low’s side won 2-0 when these teams met in Belfast in September and Germany vs Northern Ireland odds.

Northern Ireland’s faint hopes of automatic qualification ended with a goalless draw against the Netherlands at Windsor Park.

After a bright start, captain Steven Davis missed a penalty and the game ultimately petered out into a drab stalemate, which allowed the Dutch to advance.

“It’s probably the story of the games against the bigger nations; us not taking our chances,” said Rangers star Davis. “It feels like a missed opportunity.”

However, he added: “While we are disappointed now, we will look back on this match and take a lot of positives from it.

“Whatever way the Germany game ends up, we will look forward to the play-offs after that and hopefully the draw will be kind to us.”

Although now losing twice to Holland and once to Germany, the resilient Irish have been on level terms at the interval in all three of those fixtures.

That makes 31/10 for Draw HT/Germany FT worth adding to our Germany vs Northern Ireland betting tips.