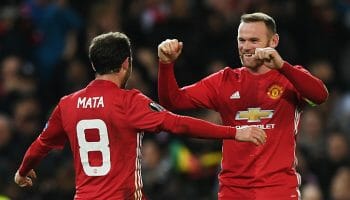 With Chelsea and Tottenham in FA Cup action, there was no change in the Premier League title odds over the weekend, but the top-four betting market did receive a shake-up.

Manchester United boosted their hopes of finishing in the leading quartet after they cruised to a 2-0 win at Burnley and Liverpool lost at home to Crystal Palace.

United are now just three points behind their Merseyside rivals and have played two matches less, while they also trail neighbours City by just one point going into Thursday’s derby at Etihad Stadium on level games.

With Zlatan Ibrahimovic out for the season and Marcus Rashford rested, Anthony Martial and Wayne Rooney stepped up to the plate by scoring in a dominant display at Turf Moor.

The Red Devils’ marathon fixture list continues to take its toll, though, with injuries mounting up for Jose Mourinho, and he has admitted winning the Europa League may still offer the best chance of securing Champions League football next season.

Looking ahead to Thursday, he stated: “I will rotate players again, give rest to some players again and let’s see what we can do. In terms of expectation, in terms of emotion for the game, it’s better for a derby with one point difference than with four.”

Klopp confident Liverpool can bounce back

Liverpool can now be backed at 1/2 for a top-four finish after Christian Benteke returned to haunt his former club with a brace of goals as the Eagles came from behind to win 2-1 at Anfield.

“I’m pretty much used to nothing more in my life than to get up after a knock,” insisted a defiant Jurgen Klopp. “Nothing has happened more often to me than this, so that’s no problem.

“There is one month to go; one wonderful football month with four games, so we will not give up, 100 per cent not. The boys have delivered a lot of this excitement, but now it’s really about serious football. Do what you have to do, and we will do.”

Liverpool’s next fixture is a trip to Watford on Monday night, while they then take on Southampton and Middlesbrough at home, plus West Ham away in a pretty kind run-in.

Arsenal were trimmed from 8/1 to 13/2 to make the top four without even playing and they can close to within three points of Liverpool if beating Leicester at home on Wednesday and Spurs away on Sunday.

Romelu Lukaku was eased slightly from 11/50 to 3/10 for Golden Boot glory after failing to hit the target in Everton’s goalless draw at West Ham on Saturday.

Tottenham striker Harry Kane is still four goals behind but was trimmed from 6/1 to 9/2 as he now has two additional games in which to close that gap.

Arsenal star Alexis Sanchez (12/1) is five off the pace but has three extra fixtures to aim at after both he and Kane showed their well-being with FA Cup strikes over the weekend.