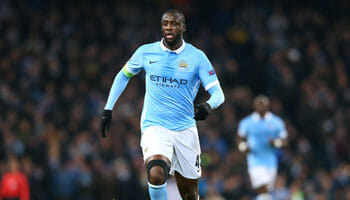 Thursday night’s Manchester derby could come down to a survival of the fittest as both City and United go in search of valuable Premier League points to boost their top-four hopes.

The Blues must recover from a stamina-sapping extra-time loss to Arsenal in Sunday’s FA Cup semi-final while the Red Devils have to cope with an injury crisis as their hectic schedule takes its toll.

A point apiece would give both teams the chance to climb above Liverpool on Sunday, so 12/5 for a draw is the first of our Man City vs Man Utd betting tips.

Manchester City can justifiably feel aggrieved at their 2-1 defeat against Arsenal, with the Blues having a perfectly good goal ruled out and also hitting the woodwork twice in a game they dominated for long periods.

“If we have to talk about referees people are going to say ‘we complain’ but when we see the highlights, for me it is very disappointing,” declared Yaya Toure.

“Maybe on Thursday we are going to have a better referee, or maybe play without a referee – I’d prefer that.”

However, although City were as impressive as usual going forward, Arsenal were able to exploit what seems ever-present defensive frailties and United could have the pace up front to take advantage too.

Both teams to score and the match to end in a draw can be backed at 18/5.

Manchester United have actually looked a better-balanced team without Zlatan Ibrahimovic for their last two Premier League games, beating Chelsea 2-0 at Old Trafford and then repeating that scoreline at Burnley.

Putting more emphasis on the pace of Marcus Rashford, Anthony Martial and Jesse Lingard could well prove a blessing in disguise again here while the fit-again Wayne Rooney can be called on to settle things down up front if needed.

However, the Red Devils will still be hard pressed to contain City’s slick passing and free-flowing movement when in possession, so disciplined displays from Ander Herrera, Paul Pogba and an overworked defence will be essential.

Jose Mourinho revels in utilising the siege mentality, though, so 23/4 for a correct score prediction of 1-1 appeals amongst the Man City vs Man Utd odds.