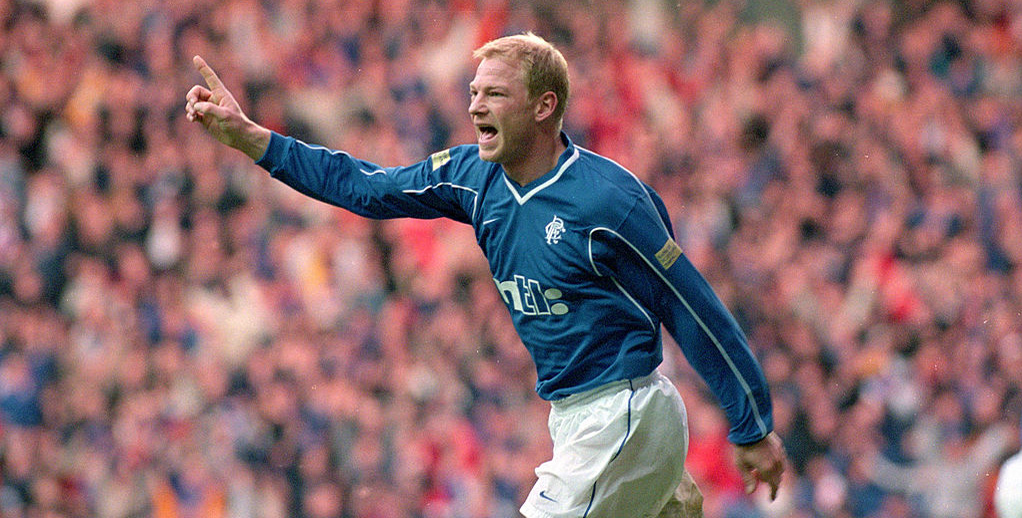 Germany international Jorg Albertz was a big hit in Scotland during his time with Rangers, claiming three titles and four domestic cup victories. Here he discusses his time at Ibrox and whether his old club can recapture the glory days by knocking Celtic off their perch, as well as the growth of Chinese football.

You left Hamburg for Glasgow Rangers, where you became a key player in the second half of the 90s. How did you experience the fall of the club? What went wrong?

That was horrible. I think many things went wrong in financial terms. Unfortunately I don’t know any details. But by now they’ve obviously delt with the crisis, although they’re far away from having a strong team like in the 90s. I hope that Rangers will be able to compete with Celtic again in the near future, both financially and on the pitch. They’re making progress.

Rangers are back in the Scottish Premier League, currently in second position. How long will it take to close the gap to Celtic?

It will probably take a while. Rangers don’t have the financial strength to compete with Celtic seriously, but I think they’re on the right track with their youngsters. After a while, bigger sponsors will be ready to invest in the club again and this will help to close the gap.

How do you judge the work of Mark Warburton, who is a relatively inexperienced manager?

He’s the right man for the job, no question about that. He backs the young players strategy, gives them a good education in football terms and develops the team bit by bit. I’m convinced he’ll be Rangers manager for quite some time to come.

How was it for you when you first arrived in Glasgow? Did your team-mates respect you from day one?

That wasn’t difficult at all, although my English skills I acquired at school weren’t much help – it had basically nothing in common with Scottish (laughs). But the lads in that team were sensational and accepted me as one of them right from the start. Luckily I performed well on the pitch, that obviously made it easier.

You played along side a world-class player in Paul Gascoigne. How did you experience him both as a person and as a player?

Paul was extraordinarily talented and one of the world’s best ever. I think a lot of his so-called friends contributed to his fall. Often they encouraged him to have a drink, even before a game, or to buy a round. Nevertheless he was a really, really kind guy with a big heart. I don’t know many people who are as cordial as Paul. Unfortunately he is being remembered for his escapades.

Absolutely, I was even the one who passed the ball to Peter (laughs). I don’t remember if he missed the open goal by five or 10 metres. It looks really bad (laughs). But it was no issue in the dressing room, at the end of the day we won that game.

Did Scotland become your second home?

Yes, I would have stayed longer but unfortunately I did not get along with Dick Advocaat.

Are there any funny episodes you can recall about your time in Glasgow?

Where should I start (laughs)? Paul Gascoigne was always good for a joke. He went fishing quite often and once he put two fish in a team-mate’s car. One could be found easily, the second was well hidden. After a while the car smelled horribly and was nothing but rubbish.

After your second stint at Hamburg you went to China as the first top-class European player. How did you settle in at Shanghai Shenhua and what were problems in everyday life?

Of course, I needed some time to settle in, everything is bigger in China. The club was very helpful though, they took good care of everything. I could, for example, bring in my dogs without quarantine. The team-mates were also very friendly and I’m that kind of guy who’s generally being welcomed with open arms, so there were no problems at all.

What were the greatest differences compared to life in Germany or Scotland?

The money was at least a lot bigger than in Europe (laughs). In those days, we were three days on the road going to play an away game. The showers only worked at our home ground. Such things were unthinkable in Europe. But I’m an easy guy, that was no problem.  A different culture, different standards, you have to embrace it if you’re taking such a step.

You won the league and the player-of-the-season award in your first year. How did you find this?

Winning a final title there was a major success. In my second year, rumours about corruption came up. I saw a few games that I thought that it was impossible to lose them. So, I had my own thoughts on that matter. That’s why my China adventure ended. I wouldn’t have stayed there even for really big money.

How was the level of football in the Chinese league?

The top teams were probably good enough to compete in the lower third of Germany’s second Bundesliga. I’m not sure if that’s still the case nowadays.

It’s surprising how many stars go to China. Is there any challenge for them?

At least they know how to play football over there (laughs). Just taking a plane to China, kicking a ball around in training – that’s not the way it works. But sure, you don’t go to China to have success there. It’s about the financial side of things.

How do you judge the strategy of buying top-class players in order to raise the level of play? Will the Super League ever reach the level of top European leagues?

No, I don’t think so. The government’s goal to develop a team that can compete for the World Cup is totally out of reach. You can’t start building a house at the roof. Chinese football won’t benefit before they implement better structures at youth level. The league might be more interesting with these incoming stars, but the goals can only be reached if the homegrown players are brought to a higher level. China won’t win the World Cup with European players, you know that.

Antonio Conte called China a threat for European football. Do you fear that young European talent will sign for Chinese clubs in the near future?

In theory, that could happen if the Chinese clubs continue to pay these wages. At the end of the day, everybody is looking out for his own benefit, but the best football will still be played in Europe. That’s why I think young talent will continue to be keen on having success here.

Could a salary cap, as we know it from US sports, be a solution for China?

Yes, it might turn the spotlight on the youth level. It could also raise sympathy among fans.

Why does China ban foreign goalkeepers?

That is strange and I don’t really understand it. They buy foreign players for ludicrous amounts of money but can’t bring in keepers. In my opinion, there are no good Chinese keepers. The idea might me to back them, to give them a better education in football terms.

Is there currently any Chinese player who is good enough for Europe?

I think the potential is absolutely there. But right now I can’t see any player who could do it in Europe – as long as there’s no development at youth level.

Is there any reason to go to China apart from money?

As a top-class player, you don’t go to China for success on the pitch. Money is key. But if you’re playing for a European club which can’t offer the chance for success, you can’t be blamed if you go to China and earn double or triple wages.

What’s the motivation for experienced managers like Manuel Pellegrini, Felix Magath or Andre Villas-Boas to coach a Chinese team?

I think that money is also key for them, but a coach also has the expectation to make his team better. This can be an interesting challenge in China if you have the chance to develop the structure of the club. At this point, there’s a great lack of structure at grass-roots level. Everything that’s standard in our youth leagues and lower divisions is almost non-existent in China.

Your last club was Clyde. What was the reason to go to Scotland again?

Pretty simple; two former team-mates from Rangers were manager and goalkeeping coach in Clyde at this time. The manager called me and asked if I could help them fight relegation. At first, I laughed and asked how this could work. I wasn’t training and had my football school already opened. But he said it would be okay as we were talking about eight games only and I could train at home and fly in for the games. Since we were, and are good friends, I did not want to let him down and agreed.

You actually scored the decisive penalty in the play-offs.

Yes, that was obviously great. First I thought that’s all a big joke but at the end I played a key role in avoiding relegation. It was kind of the perfect end to my career (laughs).

Barry Ferguson, your former team-mate at Rangers, is currently managing Clyde. How would you judge his work?

To be honest, I don’t know enough about it to say anything qualified. But Barry is great in motivating players. If he works as a coach the way I know him, he will be successful.